By KARL ACKERMANN
April 8, 2017
Sign in to view read count 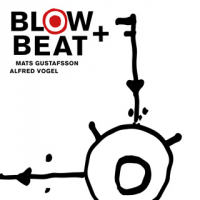 Swedish saxophone powerhouse Mats Gustafsson was playing with his trio—The Thing—at the 2016 Beazau Beatz Festival when he hooked up with the excellent, but under-recognized, Austrian drummer Alfred Vogel, who hosts the outing. The resulting Blow + Beat is an extraordinarily challenging musical experiment from two fearless advocates of free thought. The saxophone/drum duo is an improvisational gauntlet, not meant for the faint of heart but still welcoming of curious listeners.

Gustafsson has been a member of no less than two-dozen groups including those of Peter Brötzmann, Joel Futterman and Kidd Jordan and—most notably—his own Fire! Orchestra. Vogel thrives in the demanding duo formation having teamed up with Peter Madsen on Soul of the Underground (Playscape, 2013) and Peter Evans in 2016, for the excellent Il Piccolo Incidente (Boomslang), two albums with very diverse outcomes. He has worked in multiple genres that include such dissimilar settings as Spoken Word and world music projects.

The brief opener, "Solid Electric Glitter" is barely a whisper as it begins. Vogel patiently builds in texture and volume and Gustafsson then joins in, both unleashing their fury. Not all the improvisations are as harsh and aggressive as the brilliantly titled track "Get Your Head Run Over Again" would imply. That particular track, in fact, is a minimal exercise in beats, squawks and percussive effects. The centerpiece of Blow + Beat is "Clean My House." Running almost twenty minutes in length, it too takes time in building but eventually gets to a discordant core, antagonistic, but never quite becoming barbaric. The fracas dissipates and the work returns to sparse terrain. Along with the abstract, ten-minute "Our Thoughts Split," the two entries account for most of the album. Three of the pieces on the album run approximately one-minute and play out as aural and abstract experiments.

Blow + Beat demonstrates an unusual degree of discipline in free improvisation—self-imposed by Gustafsson and Vogel—and in real time. It allows the music to breathe and mutate as if it were an organic entity. Both artists adhere to independence and unity in equal measure, lending a coherence to the music. Their quiet-to-loud (and vice-versa) transitions provide their own sense of direction and while it may not be a route for the masses to follow, it is certainly an eye-opening experience for those who dare.

Solid Electric Glitter; Our Thoughts Split; Clean My House; Hungry Hand Fading; Get Your Head Run Over Again; Make Your Soul at Home; Blow and Beat.