Burton Greene: Bloom in the Commune 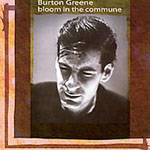 In one of the interviews that flesh out this new reissue, pianist Burton Greene states that while he doesn't often listen to a record once it's done, his first date for ESP sounds quite fresh. Bloom in the Commune (originally released simply as Quartet but now retitled via the first track of the original B side) comes from a time when the clichïs associated with free jazz had yet to put a stranglehold on creativity and wide-eyed experimentation is in evidence on every track.

Greene's compositions are terse, stark and aphoristic, in the manner if not the language of Ornette Coleman. In one sense, the compositions are a return to tradition, Greene having been involved in a freely improvising group several years earlier that also included Alan Silva (available as The Free Form Improvisation Ensemble on Cadence). Much of that group's exploratory spirit remains for this date, recorded in December of 1965. His pianism is bolstered by preparations that enhance the percussive qualities inherent in his approach, especially on the hair-raising "Cluster." Yet, on the spare and achingly beautiful "Ballade II," he demonstrates contrapuntal ingenuity and a charming affinity for the triad.

Greene's group proves ready and willing to follow every timbral and textural adventure, especially noteworthy contributions coming from bassist Henry Grimes and saxophonist Marion Brown. Grimes' sound is huge, deep and sharp, much as it is now. He unleashes pizzicato tornadoes and offers arco whispers with equal parts daring and precision; just check out his first solo on "Cluster," where he threatens to overload the recording equipment while stating, in no uncertain terms, the bold truths of the emergent new music. Brown works along similar lines while deftly avoiding the bebop-inflected Parker-isms still present in too many supposedly 'free' contexts. His exhortations are jagged, sinewy and sometimes bluesily bent, pushing rhythmic boundaries in post-Dolphy fashion with a smooth clear tone.

The interview segments are fascinating. The perennial question of ESP founder Bernard Stollman's payment practices is raised—let's hope the surviving musicians see something for this reissue—and Greene provides a few pithy anecdotes of the times and philosophies that spawned so many groundbreaking records. The reissue sounds marginally better than other versions, especially regarding stereo separation. As with so many of the early ESP albums, this is not one to be missed and its reissue is welcome.