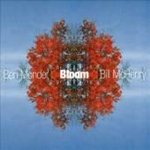 The world of improvised music is a wondrous pursuit, but as soon as the word "composition" creeps into the proceedings, it can have a slightly stricter form. How much form begins to curb spontaneity is entirely up to the musicians. In the case of guitarist Ben Monder and saxophonist Bill McHenry's Bloom, thankfully, the form does not disturb the path of forward-thinking creativity. However, there is enough structure to the duo's music for it to have a strict beginning, middle and end. And although it is mostly Lydian in nature, these musicians have given themselves enough room to float, creating wispy modal paths to pursue throughout their musical sojourn.

Monder usually assumes the role of modal perpetrator, from which the dup leaps off into the unknown. He taunts McHenry with melodic or harmonic vocalizing that is so seductive that the saxophonist has no option but to fall prey to its subtle charms. The guitarist is sometimes linear, with quick stabbing notes that are deeply etched on the tune and go in unseemly directions (as in "Food Chain"). At other times he is deliberately vague and smudgy ("The Shadow Casts its Object," "Winter") or loud and trashy ("Heliogabalus"). As he tosses out harmonically rich phrases, McHenry is invited to take issue with them or accept the gauntlet and dive right in to further the search for a conclusion.

McHenry is more elusive. Although he plays tenor, he embraces a subtler tone, working more with shades, colors and textures as auras around the notes rather than the actual notes themselves. As a result, he plays less, holding down his keys longer, delaying the moment of departure. This has a kind of visceral effect on the music. It begins to describe more the effect on the nature of things rather than the object itself. In "Food Chain," for instance, the depth of desolation—or hunger—takes on a new meaning with his airy choice of colors, and often the sinister aspects of what the song is trying to describe is brought to the fore.

Much of the soloing on this record takes an inside-out route, much like the titles "The Shadow Casts its Object" and "The Shimmering Now That Breathes You." This is the kind of music that makes for much of the excitement that bodes extremely well for Monder and McHenry, both individually and collectively. Like Gene Pritsker, another musician who gloriously bends and blurs the boundaries that capitalist marketers tend to apply to creative music, Monder and McHenry have a bright future in the world where intellect and creativity have sublime value.