By KURT GOTTSCHALK
November 16, 2003
Sign in to view read count 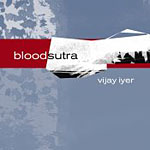 Pianist Vijay Iyer isn't afraid of big ideas. He premiered a song cycle about urban life and ethnicity and "lives in transit" at the Asia Society in May (documented on the Pi Recordings release In What Language, also released this month), and is the 2003 recipient of the CalArts Alpert Award in the Arts in the field of music. He was also nominated for Up and Coming Musician of the Year by the Jazz Journalists Association, and was listed as a "rising star" in three categories (jazz artist, pianist, and composer) of Down Beat magazine's annual critics poll.

The master plan behind his new quartet CD is a set of 12 compositions that "concern themselves" with "the interrelated concepts of health, kinship, identity, race, violence, liquidity, desire" (the blood) and "ancient sacred and scholarly texts on the healing arts" (the sutra). The concept doesn't seem to carry through to the music - don't look too hard for evidence of the highbrow hybrid - but the music itself is strong. And despite his obvious interest in his Asian heritage - from the title of this disc to the subject matter of the Transit song cycle and his ongoing partnership with saxophonist Rudresh Mahanthappa - Blood Sutra is a straight-ahead session. Lofty liners notwithstanding, this is a good, old-fashioned jazz date.

Or a great one. The compositions are bold, the playing (with Stephen Crump on bass and the excellent Tyshawn Sorey on drums) is confident and the sound (in 5.1 surround, engineered by John Snyder) is almost ridiculously bright. The group is about as solid as it gets and work well with the material, although Iyer's compositions ultimately aren't the strength of this disc. Where they really shine is on a smart arrangement of "Hey Joe" titled "Because of Guns (Hey Joe Redux)." Iyer might see it as an antigun reworking, but it's really just a well-played standard. Without the high-mindedness, it might be even more convincing.