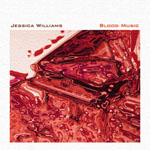 This electronically rendered music thing got its start with Wendy (then Walter) Carlos back in 1968, with the Grammy-winning Switched-On Bach (CBS Records). Carlos played the then-new Moog Synthesizer, giving a serous electric glow to composition by Johann Sebastian Bach.

"NOT JAZZ," it says of the CD on Williams' website. The often dense, electrically orchestral and frequently groove-oriented sound gets tagged "creative, Indie, 21st century music," which pretty well nails it.

Jessica Williams plays music. Okay, she's made her name as a jazz pianist on mostly trio and solo outings and, after forty-plus years and fifty plus albums/CDs in that endeavor, she's slipped into the lead of a talented pack playing that game. But Blood Music—and Virtual Miles, Volume 1 and Virtual Miles, Volume 2 (Red and Blue Recordings, 2006 and 2007, respectively)—showcase her considerable talent in stirring up an acoustic/electric brew, with sequences and synthesizers, bass and drums (played by Williams) and various technologies that guys like Coltane and Monk never had the chance to try.

Much of Blood Music features Williams on acoustic piano, playing in a pulse of electronic sounds. The result gets into modern grooves and sprawling atmospherics. "Signals" sounds Spanish/flamenco-ish ( there may be neo-cajon in there), while "Iraq 43" (this is something of an anti-war record) throbs with foreboding alarms wavering over a dark dangerous rhythms mixed with crackling, indecipherable radio transmissions writhing in a dark bed of electronic forward momentum. "Funeral March" features majestically melancholy electro symphonic washes of sound, and "Nyaho" has a world beat flavor, with Williams' sharp and succinct acoustic piano playing over sub-continent percussion and a cool electric breeze.

And then there's "Invention for Elaine," a characteristically lovely Williams ballad, played solo on acoustic piano.

Blood Music asks those familiar with Williams' always outstanding solo and trio acoustic recordings to suspend expectations in that direction and accept her in a plugged-in roll. Do that, and there are some excellent and compelling modern sounds to be found.