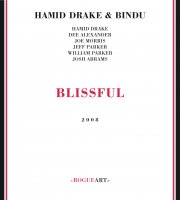 For every musician, music is a serious endeavor and one that has no equal. Yet, music also means something different for each musician and it is this difference that generates vitality of the art. For drummer Hamid Drake, music links him to an explicitly spiritual world.

The name of his group, Bindu, finds its source in Yoga practice. Bindu signifies the turning point from one plane of mediation to another, where all Yoga meditation practices converge. That point marks the density and complexity, the simplicity and subtlety of time, space and mind.

Blissful is the second recording for Bindu. The group has changed personnel, but the power of the music has not. Drake and his fellow improvisers create the music for all of the songs; any lyrics sung by vocalist Dee Alexander were written by the 18th century Indian poet, Ramprasad Sen.

On "My Blissful Mother," a monotone opening from the shenai and voice, soon joined by a feathering of the banjo-like guimbri and bata, rolls out a sonic carpet where focus can sharpen. The improvised instrumental passes through about eight minutes before Dee Alexander breaks into an a cappella section where Drake shapes a rhythmic pattern on the frame drum to lock the ensemble into a ceaseless chant. The guitar snakes in and out of the musical line. The rhythm undergoes several changes. By the conclusion, the guimbri and the frame drum fade out into nothingness.

But something re-enters. Joe Morris and Jeff Parker interlace a two-guitar microtonal conversation. Drake picks up the sticks to play his drum set and yet another realm of sound is explored. The guitar lines transform and overlap into string bass lines. The arco and pizzicato skillfulness from William Parker and Josh Abrams bounce through an upbeat, quick-paced vibrational field. The full complement of instruments joins together to resolve "Playful Dance at Soma."

The balance of the recording is nothing less than inspirational. In every song, long or short, an intricately diverse instrumentation conveys a sacred message of Kali, the Hindu Mother goddess. Alexander's high- pitched often syllabic vocals become instrumental in themselves ("There Is Nothing Left But You"). The doson ngoni expresses the pulse as much as the drumming does. The shenai communicates a dissonance suggesting a dance-like character to the singing and recitation of the poetry.

Because Drake's musical life is defined by rhythm, the rhythmic influence naturally affects how the music is spawned. The drum set inserts a rapid insistence that describes straight-ahead 4/4 count sensibilities, whereas the exotic tabla, bata and frame drum speak highly regulated cyclical rhythm lines which are penetrating and inviting. Drake's miraculous infallibility as percussionist and drummer can never dissolve; he blazes his path into the bandleader position with no less acuity.

When Drake springs off the tabla on "The Beautiful Names" and sings the final song, his male voice grounds a spontaneous musical connection to serenity, and appeals to the raising of consciousness, above materiality, into a realm of pure experience, musical or otherwise.

Track Listing: My Blissful Mother; Playful Dance at Soma; Visions of Ma; Supreme Lay Victorious in Battle; Only Longing of My Soul; There Is Nothing Left But You; The Beautiful Names.