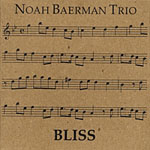 Bliss, the new CD from pianist Noah Baerman's trio, is a collection of nine original compositions by the leader, a respected player and jazz educator. It is extremely rare for a recording to translate effectively the energy an ensemble has during a live performance. Bliss successfully manages to be an exception to this phenomenon.

For starters, CD opener "Second Sunrise" feels like the first song of a set. The tune, which features shifting time signatures, is a perfect introduction to the band, with mid-level energy, not giving away too much right at the start. Bassist Henry Lugo takes an interesting solo, displaying a penchant for clever phrasing and use of space. The next track, "(When Jackie Talks) People Listen," really gets things cooking. If the audience wasn't paying full attention before, this song would have made them put down their drinks and take notice. The driving feel of this piece makes for a fun, engaging listen. Drummer Vinnie Sperrazza gets to shine, not only with skillful cymbal work, but also with a killer drum solo.

"The Elegant Mrs. McLean," an appropriately titled ballad, creates a relaxed ambiance. This piece brings to mind a New York City jazz club, very late at night. Baerman's laid-back, behind the beat phrasing adds to the stately feel of the tune. "Shake It, Sheila," another standout, is a joyous, bluesy tune. One could imagine an audience getting up to dance to this groove. An exceptional part of the arrangement has the rhythm section dropping out right before Baerman's solo, allowing the pianist to showcase his soulful, rhythmic playing.

The title track closes out the CD. This truly beautiful composition has a spiritual, gospel-influenced quality. It starts out simply, slowly building, before coming to a serene end. The interplay between trio is subtle and effective and a listener gets the sense that the pianist really feels every note he plays. Baerman and company have created a recording of depth and beauty. If they sound this good on CD, they must be great to see live.