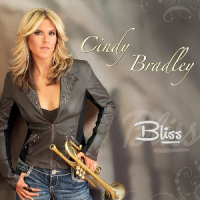 Everything you need to know about Cindy Bradley's new album Bliss is right there on the CD jacket photo. Her blonde hair is coiffed, she strikes a stern, yet accommodating stance with no smile, but a hint of cleavage, her right thumb hooked around a belt loop and her left grasping her trumpet.

Looks matter in music and Bradley's good looks are part of the packaging of her for smooth jazz stardom, but what about the music?

What makes jazz interesting is its creativity, the willingness to explore the improvisational skills of the players, the giddy feeling of not knowing what comes next. Most smooth jazz tends to avoid these things. Because there smooth jazz still is jazz there are still sudden bursts of creativity, but little in the way of genuine, sustained spontaneity.

Every great jazz album has singular moments of astonishing agility, musicianship, and precisely hitting all the right notes. Let's call this the "Lean Forward" moment because it will make you lean forward, turn the volume up and listen to it all over again. True "lean forward" moments are few and far between, but you know 'em when you hear 'em.

Bliss is the third album from trumpeter Cindy Bradley for the Trippin' N' Rhythm label, which is dedicated to the smooth jazz genre, and it pretty faithfully follows the blueprint of her previous efforts. Nine or ten tracks on wax of funky grooves, pretty ballads, professional playing and its all over and done in about an hour. This is fairly standard stuff no better and no worse than a thousand other similar albums in the genre.

The lively opener, "Button Legs" gets the proceedings started off nicely and "Riverside Drive" has its moments, but the real Lean Forward moment doesn't come until Track 4 and it's not on a composition written by Bradley or producer Michael Broening. It's "Squeeze Me," a 1941 Duke Ellington composition also known as "Just Squeeze Me (Don't Tease Me)." The tune has been covered by artists from Ella Fitzgerald, Miles Davis, Peggy Lee and Jane Monheit. So what's it doing here?.

Nothing much. Just giving Bradley a chance to add her name alongside with Davis, Clark Terry and Louis Armstrong among those to take their trumpet out and blow some hot and heavy licks to the turn with able accompaniment from Breuning's keyboards and guitarist Bill Moio. Bradley would be the first to make it clear she isn't in the company of those aforementioned masters of the trumpet. Yet she never will be if she only stays in a smooth jazz comfort zone.

Among its other virtues, jazz is about taking the occasional risk for both the artist and the audience. For what it is, there is nothing wrong with Bliss. It's enjoyable without being memorable. Bradley is a dedicated student of the idiom and she is brimming with potential, but even Miles released nearly 20 okay, lousy and pretty good records before he made an essential one with Birth of the Cool.

Bradley has the time but whether she has the plan to go beyond making safe smooth jazz to more Lean Forward music is entirely up to her.

Button Legs; Bliss; Riverside Jive; Squeeze Me; 49th & 9th; Could It Be You; Comin' Home To My Baby; Lost and Found; Sharp A Strut; God Bless the Broken Road