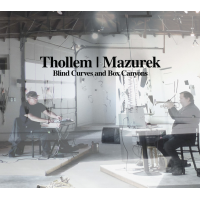 In a remote outpost of creativity, the little town of Marfa sits on less than two square miles, a one-hour drive from the Mexican border. With a population of about two-thousand, it may, nevertheless, be the Brooklyn of the West Texas desert plateau. From its beginnings as an artist colony (of sorts), Marfa has been developing as an arts destination since the early 1970s. The town now has a National Public Radio station, fine dining, an excellent museum and several art galleries. The Marfa Book Company is a bookstore and performance space that has been a stable of the town for almost two decades and host to Rob Mazurek's art exhibit "Marfa Loops Shouts and Hollers" in 2016. The exhibit concluded with a duo music performance captured on Blind Curves and Box Canyons with Mazurek and multi-instrumentalist Thollem McDonas.

Mazurek is globally renowned for his unique electro-acoustic sound projects and as the leader of several Chicago Underground Duo extensions, as well as his Exploding Star Orchestra, Sao Paulo Underground, and Black Cube SP. In recent years, however, Mazurek has been increasingly recognized as a visual artist. With an arts residency at URDLA Centre International Estampe & Livre in Villeurbanne, France and at the French Abbaye Royale de Fontevraud, where he developed three-dimensional lithographs as graphic scores.

San Francisco Bay Area native, pianist/keyboardist and composer, McDonas has recorded more than fifty albums with a diverse assortment of artists including rock's Walter Egan, country singer Suzy Boggus and many creative music luminaries such as William Parker, Pauline Oliveros, Vinny Golia and Cooper-Moore. As a leader, his range is limitless, running from the classical On Debussy's Piano and... to acoustic free improvisation on Gone Beyond Reason to Find One (both Self-Produced, 2010) to a series of avant-garde trio releases with Nels Cline and various guests. Blind Curves and Box Canyons is just one of a dozen recording projects that he is involved in 2017.

Only briefly acquainted, McDonas and Mazurek show remarkable responsiveness to each other in these complex improvisations. The nineteen minute opener "Shouts" begins in a haze of electric piano and synth before Mazurek slips into a disembodied wordless chant adding to the otherworldliness of the piece. About fourteen minutes in, the cornet becomes identifiable, the piano's notes clear, but the playing still open and free. "Hollers"—at almost twenty-one minutes—initially features bells, buzzing and discordant brass. More frenzied than the opener, it settles down a bit at the midpoint, but it's a relative comparison. Here, Mazurek's cornet takes on a haunting voice in the eerie setting of percussive effects and electronics. "Howls" gives the early impression of being more structured, the electric piano sounding like a thrashing metal guitar but a din of percussion resets the piece and it runs its course as a bustling, electric experiment.

Blind Curves and Box Canyons is as engrossing as it is challenging. The first forty minutes has an organic feel, that being no small accomplishment if the face of so many synthetic sounds. In particular, Mazurek's placement of vocals and cornet is mesmerizing and draws the ears in. As his star rises in the visual arts field, it seems to supply Mazurek with new inspirations that he successfully translates to music.