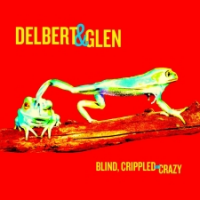 In 1972, Texans Delbert McClinton and Glen Clark had already been a part of the Texas music scene for ten years. They recorded Delbert & Glen (1972) for Koch, inaugurating two careers, McClinton's being the more fruitful. That recording produced "B-Movie Boxcar Blues," which found its way onto The Blues Brothers' Briefcase Full Of Blues (Atlantic, 1978), jettisoning McClinton's already considerable popularity. The two singers team up again, forty years later, for Blind Crippled and Crazy, demonstrating that the formula of clever and sexy lyrics combined with that certain Texas alchemy of country, blues, soul and R&B remains a durable and enjoyable format for making music.

After recording the follow-up to Delbert & Glen, the pair recorded Subject to Change (Koch) a year later and then parted professional ways. McClinton and Clark began talking about reuniting in the early 2000s, a discussion now come to fruition. Blind Crippled and Crazy is Texas Roadhouse tried and true, filled with twelve originals that betray that the best lyric writing is today in the country vernacular, the better produced in Austin as opposed to Nashville.

The band employed is a simple one, driven properly by guitarist Bob Britt, whose slide guitar on "Been Around A Long Time" and "Good As I Feel Today" shows the regional value of that guitar technique and its value to Southern music. Low-down blues, country & western, rock and soul are mashed up as they have been since one Buddy Holly brought rock & roll to Texas. McClinton does what he does best...sings with a Texas accent and attitude.

Been Around A Long Time; Whoever Said It Was Easy; Oughta Know; World Of Hurt; More And More, Less And Less; Just When I Need You The Most; Somebody To Love You; Sure Feels Good; Tell My Mama; Peace In The Valley; Good As I Feel Today; If I Could Be Your Lover.