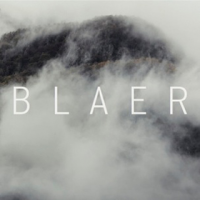 Led by pianist and composer Maja Nydegger, Blaer is a jazz quintet from Switzerland. This self-titled album is the band's debut release—a collection that establishes the band as an ensemble of real promise, with early signs of a distinctive and individual sound emerging.

Blaer operates on the calmer, more languid end of the jazz spectrum. It's capable of bursts of energy and Nydegger (also a member of Morpheus label-mates AKKU Quintet) isn't shy of composing more aggressive, dramatic, passages—most notably the first section of "Deep Blue" which features drummer Emanuel Künzi venturing into John Bonham territory—but most of the tunes on this debut release would form an ideal accompaniment to quiet moments of reflection.

"Welcome" sets the style—anchored by Nydegger's repeated two-note phrase, it builds slowly as the remaining four musicians become more dominant. The dreamlike "You Told Me" and "Brian" are reminiscent of UK jazzers Polar Bear, albeit without their electronics. "Without" is an impressive demonstration of restrained and controlled performances. Nydegger's opening piano phrases on "Waiting For Snow"—a duet with Nils Fischer's bass clarinet and the gentlest and loveliest of all of these tunes—immediately evoke crisp winter mornings and the eager anticipation of those first scattered flakes.

Blaer was recorded in March 2013, two years before its release. No doubt Blaer has already progressed beyond its first recording sessions—the prospect of further releases from this exciting quintet is a pleasing one.

Welcome; You Told Me; Brian; Waiting For Snow; Without; Deep Blue; Erased.