By JEFF DAYTON-JOHNSON
April 6, 2008
Sign in to view read count 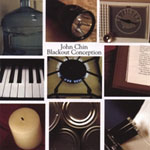 The début recording by pianist John Chin features two compositions by Kenny Barron, and fans of the great Philadelphia pianist will most probably like Blackout Conception for the elements it shares with Barron's playing: a strong, deliberate touch, bluesy delivery, well-argued improvisation, a streak of sentimentality.

The songs on this record are long-ish. This is jazz, of course, and in live performance long numbers are de rigueur, but who among the younger players in the broad mainstream (save maybe Chris Potter or Nik Bartsch) routinely turns in ten-minute tracks on every album cut?

The long playing times make a lot of sense in Chin's case, however. On some tracks, Chin takes his time to develop marvelous solos. Barron's "Lullaby" is an excellent case in point. Chin's solo begins with a dense chord-based section, akin to the strumming of a Spanish guitar; this is followed by an ingenious construction based on sprinkled notes, leaping deftly around the keyboard, only to finish with a grandiose, Oscar Peterson-like close. And this is just one facet of his multifaceted playing. Chin's solo on Billy Strayhorn's "Passion Flower" is symphonic in an appropriately Ellingtonian way. On "I Won't Argue With You," meanwhile, you could close your eyes and imagine you are hearing Charlie ("Behind Closed Doors") Rich. (This is a compliment; Rich was a fine soul-jazz pianist.)

Other cuts run long to allow Chin to repeat the themes somewhat hypnotically for long stretches, like Miles Davis did on "Nefertiti," without solos. Or rather, these numbers—like the unapologetically sentimental "I Won't Argue With You"—feature improvisation based on the melody, rather than the harmony, the opposite of the usual jazz strategy. (There are, of course, precedents, Art Tatum prominent among them.)

Tenor saxophonist Mark Turner of the Fly collective gives a remarkably assured and mature performance on four cuts here. Drummer Chris Patterson, while he doesn't have the sinuous lateral capacity needed to underlie the Brazilian reading of Barron's "Joanne Julia," is a tremendously sympathetic player: especially noteworthy is the interweaving of his drums with Chin's sprinkling solo on "Lullaby."