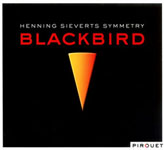 The The Beatles are given the dominant spot on Blackbird, but most of the music comes here from bassist/cellist Henning Sieverts. Sieverts—who has a long history of composition, having written for string ensembles, the theater, and groups of various size—locks in jazz and classical music, both in their individual frames and in an elegant blend, making for an alluring record.

Sieverts has an ear for melody and he weaves a rich tapestry of motif and mood. His arrangements work in tandem, bringing in tension and flow, much of the former coming from the interaction between clarinetist/saxophonist Chris Cheek and trombonist Johannes Lauer. "Half-Brain Dream," with its shifting tempo and pulse, finds the two interlocking lines, creating arches, and letting the tide of improvisation ride above the ticking bass and drums. The swinging "Wingswing" is structured, but the bounce is soon cast aside as the two shadow each other with lithe elliptical lines that contrast its churning rhythm. Pianist Achim Kaufmann takes it into the mainstream with a flow of fertile ideas; the dynamics have changed but the pulse is constantly engaging.

The balmy air of folk music wraps its wings around "E Bird," articulated by Chris Cheek on clarinet. He lets the song seep in and linger as Sieverts plays a plaintive cello, with Kaufmann marking emphatic chords and drummer John Hollenbeck adding splashes of color on the cymbals to introduce contrasting elements.

"Blackbird / Wenn Ich Ein Voglein War" make an interesting pairing. The former takes shape gradually, the lines drawn by Kaufmann and Lauer and then given shape by Cheek. But the pattern is fluid and the transition of the tune is never predictable. The latter is a melodic folk tune, with Cheek tipping his clarinet into the sweetness. Seiverts adds the tang, ruffling the bottom with rumbling bass lines.

Not all of the tunes are about birds. Charlie Parker's "Blues For Alice" finds a comfort zone helmed by Cheek, whose tonality and sense of time and pace are one of the highlights of the album. Kaufmann invents thematic adjuncts before the edge is captured by Cheek and Lauer, who play the melody backwards.

Seiverts shows a fine sense for creating music that is tangible and gripping, and in doing so serves up a rich and often sumptuous experience.