By KARL ACKERMANN
December 19, 2016
Sign in to view read count 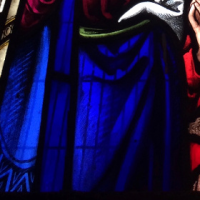 The great—and often dark—writer, Neil Gaiman, in his recently published book of short stories titled Trigger Warning tells the tale of the mythical dog-beast—the black shuck—that is to be avoided at night because ..."if you see him—you die.." Well, that's fairly dark and it sets the tone for the third duo outing from Kit Downes and Tom Challenger. Black Shuck follows the pair's Wedding Music (Loop Records, 2014) and Vyamanical (Slip Imprint, 2016).

Black Shuck has been issued both as a cassette and a digital download and would be categorized as an EP, with only two tracks and a total running time just over twenty minutes. Alex Bonney, a mixing/mastering presence from the first of the duo albums, returns in a dual function, adding electronics to "One." That first track is, in fact, not a duo performance but a septet while "Two" is simply credited to Downes and Challenger. Because the electronic manipulations dominate both tracks, it is not obvious that there is such a great discrepancy in the formations.

Black Shuck is certainly ominous. Though brief, the droning quality of the music makes it feel longer than its real time and, in a way, preferable to a more extended treatment of this style of music. Only on "Two" do we get a ephemeral sense of instruments in their real voice, though Downes' piano (he was credited with organ on the previous two releases) does sound more like an organ.

With each of the Downes/Challenger releases, the music has become more entrancing and despite the electronic component, Black Shuck is not genre-specific. There is an ambient quality as well as a lyrical one though the latter takes careful listening. The artists provide sufficient layering to reveal subtle levels within the two compositions. A progressive effort and well worth the listening.