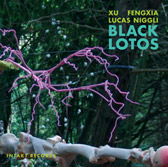 This duo of multi-instrumentalist Xu Fengxia and percussionist Lucas Niggli sometimes produces quietly compelling music with drums and Chinese plucked instruments, but the opportunities for it to really take hold are significantly undermined by Fengxia's vocal interjections. Such is the effect of these that the impact of the duo's subtle interplay is too often lost.

The opening "Bell Smell" is a case in point. An unworldly air prevails that is intriguing, hinting at all sorts of possibilities. The music's accommodation with silence is integral to this, with Fengxia in particular showing an innate grasp of the worlds of dynamic possibilities.

The mood, thus established, prevails too in the opening of the following title track; but once Fengxia starts vocalizing, this mood is lost. At the same time both declamatory and meditative, she takes the music to a prohibitive place, as though she's preaching to the converted—to the detriment of anyone who isn't. Again, the quiet and meditative nature of the music could speak for itself if it was given a chance, and even when Niggli applies mallets to tom-toms, the effect only enhances the momentum of the music.

The lengthy "Ride Over Blue Sky" lacks much in the way of drama. Indeed, its flow is anything but compelling. In her vocal, Fengxia gets downright exhortatory but to little effect; whilst Niggli's maintenance of a kind of pulse renders the music too earthbound. When things get hectic, with Fengxia seemingly speaking in tongues, the effect is oddly uninvolving.

"Bow Blow" is tantalizing, as there are passages where the very absence of striving for effect results in the music having greater impact. In her vocalizing, Fengxia reaches a far better accommodation with the music, as opposed to taking proceedings by the scruff of the neck and imposing her will, as she does elsewhere. That meditative element—a key element of the duo's music—is in full effect; but here the mood and impression of it is profound rather than superficial, as if the duo is hinting at some deeper, more fundamental truth.

The closing "Choose Goose" tantalizes again. Even in its most agitated passages, the two players are clearly animated by the kind of mutual understanding that is one of the abiding pleasures of improvised music. But as elsewhere, Fengxia's voice has the effect of fixing the music, and indeed the attention, which compromises the impact of the music alone.