By EYAL HAREUVENI
October 25, 2012
Sign in to view read count 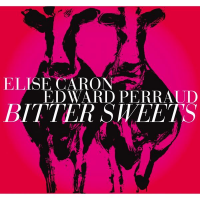 The musical meeting of French vocalist Elise Caron and fellow countryman, drummer Edward Perraud, is a match made in heaven. Both are energetic free spirits, boundless in their sonic articulations, inventive and adventurous. Caron, with an infinite vocal range, dresses her voice in whatever character that comes to her mind—spoiled diva, hyperactive child, conspiring geisha, tempting goddess and many wild variations in between. Prolific Perraud is a master colorist, as evident from his solo album Préhistoire(s) (Quark, 2010), and uses anything available within his reach in order to set a driving rhythm.

Bitter Sweets is a set of 18 brief musical candies, where anything goes and everything does happen, organically and playfully, all in about 36 minutes—from the energetic vocal-drums collision on "Slanguage," through the Far Eastern-tinged improvisation, "Au delà de l'eau de la rizière," and the hilarious, suggestive vocals that meet alien percussive textures on "Give Me Your Tong," to the blend of imaginative operatic musings and epileptic rhythms on "Glissando scivolante," or the inventive "Le beau moqueur," where Caron uses her vocals as a futuristic reed instrument. Caron gets into the character of a conspiring Far-Eastern witch on "Le gras et le mouillé" quite naturally, and convinces in the panic-ridden "J'ai perdu mes lunettes." Throughout, Perraud encompasses her vocal flights with imaginative yet economic reserve.

All these colorful improvisations remain focused and simple. The duo makes its point with healthy doses of passion, humor and irony, and moves ahead to the next improvisation. There are exceptional parodies, like the magnificent "Le rappeur Khalité prie," where dadaist Caron's rapper-like gibberish encounters Perraud's hyperactive drumming, or the instrumental, atonal "Ni Boulez ni marteau," that refers to composer Pierre Boulez. No wonder this album is concluded with the 23 seconds of "Mille feuilles" that actually does sound like one thousand dense sounds and vocal utterances.