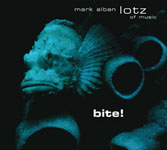 Jazz has brought many innovative and original approaches to the world of music, but an entire album inspired by fish could well be a first. Flautist Mark Alban Lotz's Bite! offers 19 tracks of fresh, entertaining and uplifting music inspired not just by fish, but by "a dutch view on fish," a combined video and music project.

Bite! is a joyous work. The quartet's musicianship is consistently excellent and conveys a clear feeling that the players had fun during the recording. The sleeve notes and track titles also convey this sense of fun. Alan "Gunga" Purves makes use of a range of percussive instruments including the Brim Bram, an instrument of his own design based on a wooden frame with attached rubber bands, which is helpfully pictured on the cover. Tune titles name check the Clownfish, Squid, Royal Herring and Seahorse, among others. "Get Along with Mating Squids" blends Lotz's flute and Purves' percussion in a splendid evocation of squids mating: "The Bathyscaaf," in contrast, features Lysander Le Coultre's cello to beautiful effect while "Oops Swallowed" is a more free-form and rather disturbing piece.

Lotz makes particularly effective use of the bansuri flute, while Albert van Veenendaal's prepared piano helps create the underwater feel of tunes such as "Jellyfish Lullaby." At times Lotz's classical roots are more obvious than his jazz ones, but this helps to add variation and contrast. He has previously declared his intention to bridge the jazz and classical worlds and on much of this album he succeeds admirably. The absence of a standard drum kit or bass also helps Bite! to sound fresh and unusual, the fluidity of the bowed cello lending itself more readily to the intended atmosphere of the album.

Nineteen tunes inspired by fish may not seem like a great idea for a jazz album, but Bite! is a beautifully performed, often tongue-in-cheek and always intriguing CD.