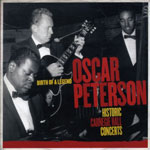 It's probably safe to say that Oscar Peterson has never shown much understanding of restraint in the course of his lengthy career, and indeed it might be argued that his whole approach to the piano has always run the the risk of coming across as the triumph of technique.

Things are a little different on Birth of a Legend. The music was recorded between 1949 and 1953, and during this period, Peterson's characteristically ebullient swing was like the most benevolent force of nature, rather than the work of a musician who viewed piano playing as some triumph of the will. Indeed, on "I Only Have Eyes For You," he sounds like the best amalgam of Art Tatum and Bud Powell, even while he lacked the incendiary qualities of the latter. He does however prove himself to have been capable of reproducing Charlie Parker's lines on "Padovane," where his lust for life is only too apparent.

The programme is split between piano/bass duos and trio tracks; the addition of either Herb Ellis or Barney Kessel on guitar sees the establishment of a lineup that Peterson's main influence, Tatum, worked in with much success. This trio music has the warmth and ebullience—that word again—that perhaps fell away the longer Peterson maintained a unit, and "Swingin' Till The Girls Come Home" as it's put across here by Peterson, Ellis and Brown reflects a group at the top of its game. "Tenderly" also offers evidence of how multifaceted the group with Ellis could be, and the Carnegie Hall audience appears audibly surprised by the restraint it shows.

Anyone for whom Peterson is the first and last word on jazz piano is likely to already have this music in some form or other. The rest might just find this release the one shot they need to hear his work. Certainly a lot of his later excesses are largely absent on Birth of a Legend, and that's a recommendation in itself.