Bird: The Life and Music of Charlie Parker by Charles Haddix 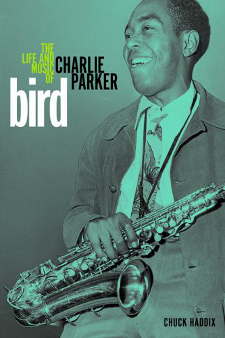 Bird: The Life and Music of Charlie Parker

Charlie Parker shares with delta blues legend Robert Johnson the lack of a comprehensive and academically-sound biography. Johnson's biographical material is strewn across several books, the earliest riddled with romance and inaccuracy, periodical articles and liner notes. While at least two completed or near completed biographies by the late Stephen Calt and Mack McCormick molder in manuscript on some shelf, Steve LaVere, the keeper of all things Johnson, remains content to collect royalties on the public domain, it looks unlikely that any of this scholarship will see the light of day while these principles live and equally unlikely after they are gone.

Haddix's biography is a taut, short account of Parker's life, focusing on the saxophonist's physical presence throughout his brief career. Ross Russell's The High Life And Hard Times Of Charlie "Yardbird" Parker is better with the narrative if a little wobbly on the facts and motives of the author. Haddix does address Parker's recording, addiction, and place in American musical history, but like Parker's life itself, this account seems not so much rushed as it is tethered accurately to Parker's meteoric rise, supernova reign and almost light-speed fade to twilight. This happens in a mere 190 pages. It is a fast read.

The plus side is that Bird: The Life and Music of Charlie Parker is a well-researched and rapidly consumed book that does well to bring the uninitiated up to speed on Parker. It does a better job that previous books placing Parker in a chronological context with both his personal and public life. It largely avoids the romanticism of Russell's biography, but then suffers from being a bit dry in reading. The minus side is that Haddix's biography adds little to the Parker canon. The story has been told many times before, not necessarily better than Haddix, whose writing is fine, but the telling of the story brings it closer to the texture scripture than history. It will be an interesting comparison to be made when Stanley Crouch's Kansas City Lightning: The Rise And Times Of Charlie Parker (Harper) is published later this year.