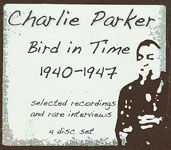 Charlie Parker is as mythic a figure as jazz has produced. His influence on the very form of the medium reconfigured the way music was approached in virtually all realms of practice. Yet, as Bird in Time 1940-1947: Selected Recordings and Rare Interviews reveals, his style did not arrive fully formed, but rather was worked toward through personal tenacity and the support of other musicians who shared in his vision.

This four-disc collection culls a bevy of examples of Bird's early musical progress as well as interviews with Bird and those closest to him. The result is a tome that, while not a viable starting point for newcomers, provides a valuable resource for those already entrenched in his legacy. The two 32-page booklets included, penned by jazz historian and producer Michael D. Anderson, only deepen this collection's worth.

The first disc opens with a lengthy interview with Parker before a private rehearsal of the changes to "Honeysuckle Rose" and "Body and Soul" is revealed. Despite the poor recording quality for much of the work here, Parker's genius shines through with ease and there remains a certain antiquated warmth to these proceedings. Parker's work with Jay McShann takes up much of the first disc, with "Honeysuckle Rose" and "I Got Rhythm" standing out performance-wise. Though Parker's roles in some of these ensembles is small the music is still wonderful and only serves to deepen one's understanding and appreciation of Parker's unique approach.

The second disc explores Parker's role in groups ranging from Bob Redcross' hotel room recordings (which feature legends Dizzy Gillespie on trumpet and Oscar Pettiford on bass) to playing in larger bands with the Clyde Hart All-Stars and the Cootie Williams Orchestra. The Bob Redcross recordings, including "Sweet Georgia Brown," "Boogie Woogie," and "Body and Soul #3" stand out for their intimate atmosphere and elastic interaction, while the better recorded sessions with Hart and Williams reveal Parker's ample abilities in more dressed-up circumstances. The last few tracks are dedicated to Parker's Lincoln Square Concert with Gillespie, a seemingly relaxed affair with strong playing from both.

The fourth and final disc opens with Bird's work with vocalist Earl Coleman, which presents Bird's gorgeously phrased solo work on titles including "This is Always" and "Dark Shadows." Further along are samplings taken from broadcasts of Barry Ulanov's All-Star Modern Jazz, which include classics "Hot House" and "On the Sunny Side of the Street" in units which include trumpeter Fats Navarro and drummer Buddy Rich.

Bird in Time 1940-1947 is a wonderful collection for Charlie Parker fans. The works themselves are great, and the supplemental interviews and reading only strengthen the music. While not necessarily for newcomers to Bird, the material here is priceless.