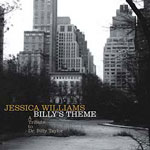 One great pianist deserves another. Billy Taylor, who needs no introduction to jazz fans around the world, is the honoree (tributary?) in this solo recital by longtime friend and ardent admirer Jessica Williams, who may need an introduction to some but can easily hold her own against the most accomplished pianists one cares to name.

As she has shown on many occasions (and recordings), Williams is a virtuoso with either hand or both. Her agile right hand always finds exactly the right note or chord to brighten any musical scenario, while her left is capable of sculpting cavernous counterpoints worthy of such masters as Oscar Peterson or Dave McKenna. Beyond that, she plays with irresistible spontaneity, warmth and tastefulness, and is a master of mood, tempo and dynamics, which is all that one can ask from a jazz pianist.

While Taylor is an able composer, Williams decided that this tribute would be her gift to him. So all the compositions are hers, each one designed to underline an aspect of Taylor's multifaceted personality. Among them are two spontaneous compositions/improvisations, and two themes that depict Taylor's unquenchable self-assurance and enthusiasm. There's even a "Blues for BT and a revitalizing ballad that salutes his stature as "The Soul Doctor.

A word must be said about the clarity and beauty of the recording itself. To capture the feeling of a concert hall, Williams writes, she placed the microphones for the piano in a "classical way, near but outside the piano, thus achieving a more open sound "with its full transient overtones and its rich, deep bass tones. The sound on the record is pure, crystal-clear and quite often breathtaking.

Breathtaking also describes Williams' performance, which she says is "some of [her] favorite work —and that covers a lot of territory. Of the recital, she says, "I think it's a fitting tribute to a man for all seasons, a man with a heart of gold and a soul as timeless as this music called jazz.

It's also a heartwarming love letter from one remarkable musician to another, and a splendid soliloquy to boot. Billy must be highly pleased with the outcome, and so should you.