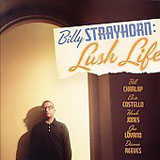 To most casual jazz fans Duke Ellington wrote some of the most enduring compositions in the history of American music. The ardent fan, however, acknowledges that many of the tunes attributed to the Duke were actually composed by or in collaboration with Billy Strayhorn.

Lush Life pays tribute to pianist/composer Strayhorn and his contribution to jazz via his timeless and brilliantly crafted songs. The CD features a stellar cast in a variety of settings that never sounds forced or premeditated in order to try and sell a boatload of records. The recording was produced to accompany a 2007 PBS documentary on Strayhorn, enriching the program and its subject by having the participants perform some of Strayhorns's signature pieces in a studio setting while offering up some unique interpretations.

The set kicks off with Bill Charlap's solo performance of a recently discovered piece, appropriately titled "Fantastic Rhythm." The quartet of tenor saxophonist Joe Lovano, pianist Hank Jones, bassist George Mraz and drummer Paul Motian perform on four tracks, the swinging "Rain Check" and "Chelsea Bridge" being amongst the highlights. Lovano's tenor really shines on "Chelsea Bridge," demonstrating why he is such a vital force in today's jazz world—a bridge between the rich traditions of the past and forward leaning improvisations that keep the music heading into the future.

Dianne Reeves sings on six of the fifteen tracks, and her sultry voice is an inspired choice. The title track is performed as a duo to wonderful effect with guitarist Russell Malone. He employs a Spanish-flavored intro, and accompanies Reeve's heartfelt vocal by weaving arpeggiated chords around Strayhorn's classic melody.

Hank Jones takes "Satin Doll" as a solo reading and adds some tension to the often-performed standard, thus keeping it from sounding like a pedestrian exercise. Jones also performs "Tonk" with Bill Charlap and the two make a heady sounding melody seem playful.

The world of Duke Ellington has been explored to a large degree. Focusing on Billy Strayhorn's legacy makes this an inspired recording, and the heavyweights that participated on this outing treat the music with revelry and respect.