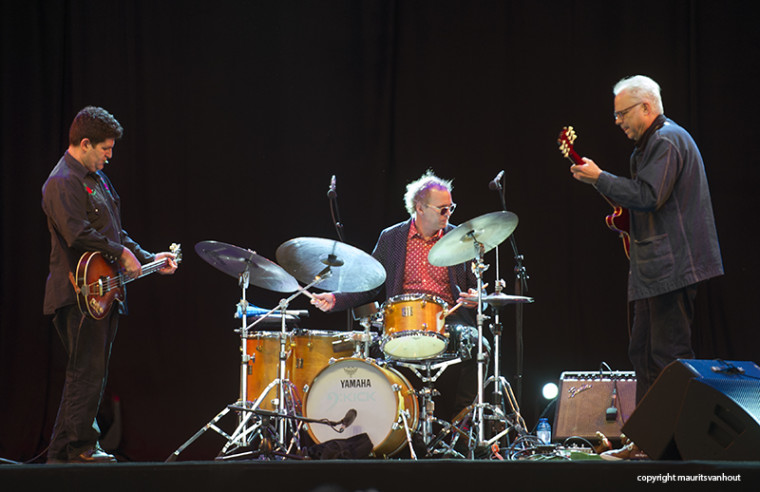 The promotional description for this Bill Frisell Trio show promised "music from Frisell's entire, and quite versatile, repertoire." A bold claim, given the guitarist's huge, varied discography, which ranges from experimental jazz with John Zorn to reinterpretations of pop songs. But although the program wasn't quite that far-ranging, it definitely had that spirit, showcasing several sides of Frisell's playing, as well as a wide selection of material.

Frisell began the concert by introducing his bandmates: bassist Tony Scherr (whose Hofner "violin bass" was certainly appropriate to many of the songs) and drummer Kenny Wollesen. Then they launched into Frisell's "Strange Meeting," an early tune first recorded on Rambler (ECM, 1985) and revisited several times since. From there it was straight into the James Bond theme "You Only Live Twice," which elicited applause from the crowd as soon as they recognized it. The band played continuously for the first half hour, in a set that also included an Americana tune I couldn't place, a free improvisation with looping that also included feedback and other extreme sounds, "House of the Rising Sun," and a jazz tune played with octaves a la Wes Montgomery.

The eclectic song choice continued for the rest of the evening. Mancini and Mercer's "Moon River" (which included the first bass solo of the night), Thelonious Monk's "Epistrophy," Duane Eddy's "Rebel Rouser," Bob Dylan's "Masters of War," another noise solo with loops...finally concluding with Bacharach and David's "What the World Needs Now Is Love." After a group bow they went right back into place for the encore. But first Frisell paused and observed, "It's so quiet...we should just not play." Fortunately they did play, a medley of the Beach Boys' "Surfer Girl" and the Chantays surf rock hit "Pipeline"—a short surf set to end the night.

The set list shows how eclectic the song selection was, but gives no indication of how much fun everyone was having, band and audience alike. Frisell—who was playing a Telecaster built by J.W. Black with a Bigsby vibrato, the same guitar used on Guitar in the Space Age! (Okeh, 2014)—has a deceptively simple sounding playing style. There's little flashy technical display, but every note counts: no matter how much space there is in the arrangement, all of the essential melodic and harmonic information is there. It's a wonder of fluidity and invention, with Scherr and Wollesen always right in sync. Fans of his jazz and Americana playing both got what they wanted, and his experimental side was on display a bit as well. Despite being a fan for many years, this was my first opportunity to see Frisell live. It was worth the wait.