By DOUG COLLETTE
May 17, 2019
Sign in to view read count
Any and every respectable collection of jazz music, whether digital or physical, should contain at least some of the works of pianist Bill Evans and guitarist Wes Montgomery. Icons of their respective instruments, both musicians also created varied ensemble templates of adventurous modern jazz, and while it is true many are already available in the marketplace, it's fairly safe to say none are any more lovingly or lavishly produced and packaged than a recent pair released on the Resonance label. The double compact disc sets Evans in England and Back On Indiana Avenue are each bountiful collections of historical information as well as music that should delight devoted aficionados of these men, while at the very same time serve to edify the curious novice listener why Evans and Montgomery deserve such hallowed reputations. 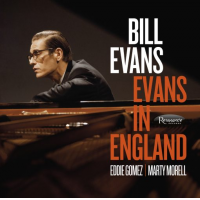 Just about a year into the tenure of Bill Evans' longest-lasting trio from 1968 to 1974, the threesome's collective intuition is well in bloom, not just in a one-on- one dynamic, but all around the ensemble. As much as bassist Eddie Gomez and drummer Marty Morrell exhibit a gentility directly reflective of the pianist, they authoritatively solidifying their bond with him, the subversive (sic) taper's work revealing none of the three betraying any discernible reticence in learning to anticipate each other's moves and complement each other's actions. In addition to the two-hours plus playing time captured during an engagement at Ronnie Scott's celebrated jazz club in December 1969, a thirty-six page booklet (as is usually included with such issues from this label) contains extensive liner notes, comprised of essays, interviews and rare photos, in sum bringing new meaning to the phrase "complete package." 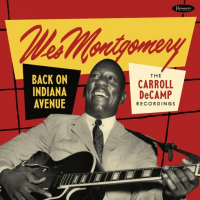 The panoply of configurations on display within Back on Indiana Avenue is startling. In fact, the range of instrumentation, from two trio formats (one without drums) to quartets and sextets seems expressly designed to illustrate the full stylistic range at the command of the guitarist. While the sound quality is not wholly pristine throughout (consider the sources as described, next to interviews with the likes of John Scofield), it's generally sufficient to offer a clear depiction of the distinct textures of organ, trombone, etc,. And, it also reveals a somewhat less egalitarian relationship between the musicians than on its companion piece (both initially available on vinyl). Yet even with a greater air of leader with accompanists on The Carroll DeCamp Recordings, there's no less a sense of keen synchrony among the musicians (or dutiful research and notes devoted to their work).

Tracks: CD 1: Our Love Is Here to Stay; Sugar Plum; Stella By Starlight; My Foolish Heart; Waltz for Debby; 'Round Midnight; The Two Lonely People; Who Can I Turn To (When Nobody Needs Me). CD 2: Elsa; What Are You Doing for The Rest of Your Life?; Turn Out the Stars; Re: Person I Knew; Goodbye; Come Rain or Come Shine; Very Early; So What; Midnight Mood; Polka Dots and Moonbeams.

Back On Indiana Avenue: The Carroll DeCamp Recordings

Tracks: CD 1: Four On Six; Mr. Walker; 'Round Midnight; So What; The End of A Love Affair; Tune Up; West Coast Blues; Jingles; It's You Or No One; Nothing Ever Changes My Love For You; Ecaroh; Sandu; Whisper Not. CD 2: Stompin' at the Savoy; It's You or No One (Take 2); Opus De Funk; Summertime; Between the Devil and the Deep Blue Sea; Easy Living; Four; I'll Remember April; The Song Is You.