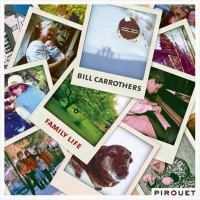 This Americana stream of creative conscience has manifested in recent releases by several artists. The majority of these releases have been from jazz vocalists, including Jacqui Sutton's freshly organic Frontier Jazz concept as presented on her 2010 debut release Billie & Dolly (Toy Blue Typewriter Productions), Laurie Antonioli's durably rustic Midwestern panorama on American Dream (Intrinsic Music, 2010) and Tierney Sutton's assertive and confident New World view, American Road (BMF, 2011). Other singers, like Carter Calvert and the Roger Cohen Trio, make a nod toward the creative American spirit, as she did with her Moving "Motherless Child"/"Washing of the Water" pairing from Carter Calvert and the Roger Cohen Trio (Self Produced, 2012). Pianist and composer Lisa Hilton accomplished the same capture instrumentally on her American Impressions (Self Produced, 2012)

Deeply romantic with contemporary immediacy, Carrothers captures his intimate family life in 15 short sketches, seemingly traversing the territory of Charles Ives, Copland, Gershwin, Monk and Gil Evans. The opening "Our House" is a tonically derive ballad recalling all of the consonance of a midwestern piece made up of equal parts frontier Copland and (the melodic soul of) George Winston. It gently radiates summer Saturday afternoon play and Sunday morning faith. Carrothers couples the old English ballad "Scarborough Fair" with a meditation on his wife. These pieces are tidy and easy to listen to and digest. "For Better or Worse" is a bit darker, with an encouraging and hopeful interior. Carrothers perfectly captures the American "silver lining."

"Snowbound" and "On a Sled" are two sides of the same winter coin. The former is lazy, languid and drowsy where the latter is jaunty unpredictable, employing barrelhouse rolls against an insistent left hand beat figure. Monkian dissonances creep in, representing the tenuous control being had sledding down hill. The piece of the most pure genius is "Schizophrenic Weather" in which Carrothers instills a feeling of disquiet going on anxious. Slowly, the pianist develops his theme weaving in and out of consonance. It is as if Ives met Virgil Thompson and the two had a musical fist fight. Williams and Kennedy's "Harbor Lights" is the only true standard present. Carrothers plays the piece as if a daydream, airy and light and crepuscular, a description fitting for the entire collection.

Our House; Scarborough Fair/Peg; For Better and for Worse; Bud and Bunny; Northern Lights; Snowbound; On the Sled; Schizophrenic Weather; Forefathers; Good Dog; A Night Out; Harbor Lights; News From Home; Gitchee Gumee; When We're Old.