By MARTIN LONGLEY
November 17, 2008
Sign in to view read count 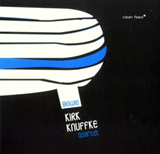 Trumpeter Kirk Knuffke has been living in Brooklyn for three years, originally hailing from Denver. Once arriving, he set about forming a trio, but then met up with trombonist Brian Drye and wisely decided to expand into quartet form. The combo's lineup is completed by bassist Reuben Radding and drummer Jeff Davis. As a debut disc (or as any kind of album) Big Wig is a crucial work. Knuffke wrote all of its tunes, daggering into just the right juncture between hurtling-together themes and broken-up chaos. His chief compositional influence must surely be Steve Lacy, with a marked predilection for perambulatory bouts of optimism, cheerfully rolling, but always gripped with a nervy tension.

On the opening "Enough," Knuffke is curt and impatient against Radding's grimy bowing. The group sound is akin to a smoked-out apiary, and in the track's 3mins 52secs plays host to a remarkable amount of curves and jagged switches. On "The Same," they're barreling and bluff, the brass rounded with a military band swagger, constantly squirming into new shapes as the leader flutter-mutes at speed.

Some of these pieces ("Page 1 # 1," "Charp," "Truck") achieve perfection (though that's never smoothed-out or regimented: this is perfection as organized chaos). The first of these three tracks becomes progressively more fragmented, leading into an oleaginous trombone solo, creaming with grace. Then the combo comes together again, followed by a climaxing drum solo of controlled flailing. The rhythm team set up a tough thrum on "Charp," helping out the cast-off freedom of the horns. A good-humored belligerence prevails throughout "Truck," barging then blowsy, then back to barging, before closing with a brawl.

The album's remaining nine numbers are almost up to this phenomenal level and there's a real fear that the quartet's November, 2008 gig at New York's Park Slope's Tea Lounge will push it's intensity up to an uncontrollable level.