By JOHN SHARPE
October 2, 2018
Sign in to view read count 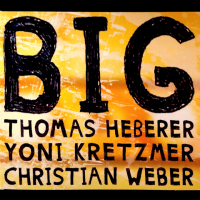 Indeed a strong group conception is evident right from the off, as one of the overwhelming characteristics is the restraint with which all three ply their craft. The serenity attained from the sustained overlapping horn lines and the pulsing bass on "Bait & Tackle" would be difficult to carry off even if composed. Similar formal qualities present themselves in the second part of "The Münchhausen Trilemma," although that arrives after an unruly start which involves staccato flurries, timbral smears and dark abrasions.

Both Heberer and Kretzmer utilize an extraordinary palette of sounds, derived from extended techniques, but do so in a controlled way which puts the focus on the music created and not the virtuosity needed to achieve it. Kretzmer integrates vocalized yells into guttural overblowing, while Heberer supplements his circular breathing, signaled by sniffs and exhalations, with vocal interjections and noises. Weber meanwhile provides the anchor, courtesy of a huge deep tone, whether plucking or wielding the bow.

However, allied to the sonic invention comes a melodic sensibility, whether that stems from Heberer's trumpet during the extemporized call and response of "Ear," or Kretzmer's breathy tenor on "Spine," where he could be caressing a hitherto unknown entry in the standard repertoire. That lyrical flourish ushers in a lovely duet with Weber's full-toned counterpoint, which culminates with the reedman capping his runs with falsetto cries and excitable squeals.

But nothing prepares the listener for the second half of the concluding "Everybody In The Cemetery Is Dead." The cut begins with Heberer channeling his inner Bugs Bunny with a litany of humorous vocalizations, before a passage of spiky threeway interplay. Thereafter Weber's arco bass conjures a reflective mood, echoed by muted trumpet, and enhanced by Kretzmer's broad vibrato which carves out a beautiful dirge-like air with gospel inflections. When it all clicks as here, the effect is astonishing.

Bait & Tackle; The Münchhausen Trilemma; Ear; The Sky Above; Spine; Everybody In The Cemetery Is Dead.