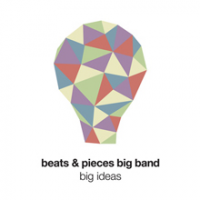 Beats And Pieces Big Band: a great name, for this is a band that knows how to emphasize the beat. Big Ideas, the debut album from this Manchester-based ensemble (a four-track EP was released in 2009 but is now deleted), is filled with danceable grooves and rhythms, mixed in with some more reflective melodies to create an absorbing and stimulating set.

The band—the brainchild of Ben Cottrell, who's the director and the composer of all of the tunes except Ben Watte's "Sisterhood"—began to make a name for itself well before the release of Big Ideas, winning the Burghausen European Young Artists' Jazz Award in 2011. The instrumental lineup is firmly in standard big band territory, but Cottrell brings added color to the sound by the use of electronics and also through Patrick Hurley's Fender Rhodes. This is a band filled with young musicians, new to the professional scene but still clearly full of enthusiasm for playing in a large ensemble. Cottrell keeps a tight rein on the section playing, which is uniformly excellent, but gives space to the players for some equally fine solos.

The Beats And Pieces Big Band makes it clear, on "Bake," that it has a powerful attack; from the opening horn salvo to the hard-hitting closing crescendo it's a full-on performance guaranteed to threaten the structural safety of any building that might play host to a Bits And Pieces live gig. Cottrell's savvy enough to know that in-your-face power isn't enough, though. "YAWF (part iii)" shows off the band's dynamic range superbly, with a hint of tension created by holding back that power and replacing it with subtler musical shades. Hurley's simple but insidious piano riff underpins most of the tune, which also benefits from Nick Walters' excellent trumpet solo. "Anymore" is a slow, reflective, number which highlights Beats And Pieces' ability to lay back and leave space—not an easy thing for a 14-piece group. Bassist Harrison Wood and flugelhorn player Graham South also contribute affecting solos.

"Jazzwalk" is the tune on which Beats And Pieces sounds closest to the big bands of the '60s and '70s. Wood's driving double bass powers things along, alto saxophonist Sam Healey adds a frenetic solo which is followed by Anton Hunter's almost hard rock guitar. "Broken" is the tune that is furthest into Big Band leftfield: a spooky, slow, ballad featuring vocals from Najia Bagi and Anthony Brown's smoky, laidback, tenor sax solo. It's the most intriguing number on Big Ideas, an assured debut which lives up to the confident assertion of its title.