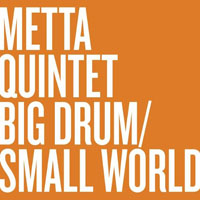 While the old adage, "those that can, do; those that can't teach" once had meaning, its verisimilitude in a jazz world where artists are increasingly forced to turn to education as a means of steady income would appear to be in jeopardy. But there have always been artists deftly committed to both teaching and doing.

New York City's JazzReach has been promoting jazz to public school students and beyond since 1994, largely through its resident Metta Quintet. Big Drum / Small World, the group's first record since Subway Music (JazzReach, 2006), is actually a globally-themed multimedia project whose goal is to present newly commissioned work from some of today's most significant composers from around the world. Big Drum / Small World may only clock in at just under 34 minutes, but with contributions from bassist Omer Avital (Israel) and saxophonists Miguel Zenon (Puerto Rico), Rudresh Mahanthappa (Italy) and Yosvany Terry (Cuba), in addition to Metta's own Marcus Strickland, it's a program so rife with outstanding charts, equally fine playing and unmitigated joie du vivre that it feels not a second too short—or a moment too long, for that matter.

Fans of SFJAZZ Collective will know what to expect here: a kind of modern mainstream steeped in the tradition, but delivered with a modernistic edge that supports the increasingly popular notion that jazz may be unequivocally rooted in the American tradition but belongs to the world and is all the richer for its incorporation of other cultural interests. Still, Strickland's buoyant opener swings mightily, with bassist Joshua Ginsburg and drummer/JazzReach Executive Director Hans Schuman—the only remaining members from Going to Meet the Man (KOCH, 2002)—bolstering soaring yet ever-thoughtful solos from Strickland (on tenor), pianist David Bryant and alto saxophonist Greg Ward.

Zenón's "Sica" is characteristically complex, imbued with contrapuntal and polyrythmic twists and turns without being too clever for its own good, leading from a motivic-based piano solo to a lengthy, intensifying trade-off between Ward and Strickland. It should be no surprise that Avital's "BaKaren" begins with a bass solo, and Ginsburg traverses the entire range of his instrument with ease before signalling the group with a mantra-like ostinato. Mahanthappa may have been born in Italy, but growing up in the US and recognizing his Indian heritage has shaped a career predicated on music of depth and unfettered vitality—bringing the west to the east, as opposed to saxophonist John Coltrane, who brought the east to the west. "Crabcakes" is Big World's most incendiary track, with Ginsburg and Schuman's odd-metered vamp providing Ward the opportunity to combined head and heart in a solo that dabbles with pure freedom (mirrored empathically by Bryant) but remains focused, even as he unexpectedly cues a unison line with Strickland that leads to an equally stratospheric feature for the tenor saxophonist.

With music this compelling and performances this committed, Metta Quintet ought to have a much higher profile. Whether or not this album actually achieves that, Metta Quintet's commitment to raising jazz visibility has ensured it a perhaps more meaningful place than simple fame would afford, rendering Big Drum / Small World a document of something even more significant.