By FRIEDRICH KUNZMANN
January 30, 2019
Sign in to view read count 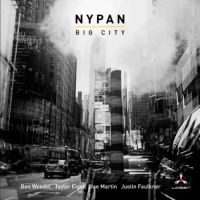 Norwegian guitarist and composer Oyvind Nypan had a special project and, accordingly, special musicians in mind when conceptualizing his newest and third record for Losen Records, Big City. After contacting pianist Taylor Eigsti and receiving his positive response, Nypan was able to rally together the rest of the cast and shortly afterwards ended up recording this set of tunes in a matter of five hours on January 5th 2017 in the "big city" of New York.

The interplay on Big City is nothing short of impressive, to say the least. Eigsti and Nypan are in a constant exchange of glances, questions and instigations with one another, seamlessly alternating complementing phrases and harmonic frames. Saxophonist Ben Wendel assumes his understated role with elegance and subtlety. Mainly responsible for melodic reinforcement, his soaring reed is most effective on the more atmospherically heavy compositions that have a slower drive, such as the opening "Greeting," the follow-up "You Old Tasmanian Devil You" and most strikingly on "Kung Kong"—a contemplative piece of music one wouldn't naturally associate its title with.

Bassist Joe Martin and drummer Justin Faulkner keep a tight foundation that is aware of its dynamic surrounding throughout and demonstrate great understanding of any compositional shifts. On the faster-paced 3/4 swing "Come What May," Nypan for once switches into a more driven guitar-tone which Faulkner picks up immediately and consequently delivers four restless minutes of ride-and-snare-dominated gallop.

"Shallow Water" and "Starfall" keep on the heavy-hearted side of the record, which is by far the overall dominant mood. While Wendel owns the former with the same sensitive touch as before, the latter shows a warm unit in which no-one feels the need to stand up in order to speak. The collective shines. "Grasshopper" closes the album with fiery pizzazz, a notion that could have been introduced to the album a tad earlier on, for a bit more variety in pace. The message, however, seems very clear: it is never too late to swing!

Øyvind Nypan thought about everything going into this and offers up his most complete outing to date, as a composer, a guitarist as well as a member of the band. His language on guitar is clear and calculated, yet all the while mindful of the overall tone, therewith filled with soul. A tasteful modern jazz endeavor through and through.

The Greeting; You Old Tasmanian Devil You; Close to the Sun; Come What May; Kung Kong; Shallow Water; Starfall; Grasstopper.