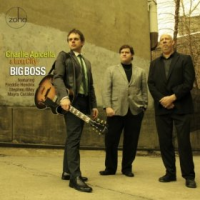 Thank god for groove music. In an era when needless complexity often dominates, it's nice to encounter a throwback record that's built on feel-good rhythms and soulful declarations. That's what Big Boss is all about.

Sparks (Carlo, 2009) set things in motion for this band, as guitarist-leader Charlie Apicella planted his flag in soul jazz territory by delivering direct-and-honest originals and covering the music of organist Dr. Lonnie Smith, guitarist Grant Green, and saxophonist Lou Donaldson; The Business (Carlo, 2011), with another Green number ("Donny Brook") and a tip of the cap to slick saxophonist Stanley Turrentine ("Stanley's Time"), operated in the same orbit; and this album, with a double shot of Green, a Willie Dixon classic, and a nod to The Supremes ("I Hear A Symphony"), is basically cut from the same cloth. That, however, doesn't mean that it's the same. Apicella has furthered his art with each record, extending and expanding his outlook while remaining firmly attached to the roots of the music.

Big Boss is just as honest and direct as the rest of Apicella's work, but it's a bit more polished in nature. The band sounds sharper and more mature than ever, with understated and coordinated horn backgrounds, the pairing of guest violinist Amy Bateman and tenor saxophonist Stephen Riley on Apicella's breezy "Amalfi," and greater attention given to blend and balance in general. But that's not to say the same old soulful spirit isn't there. Apicella takes everyone to church ("Sunday Mornin'"), shuffles along in high spirits ("I Hear A Symphony"), and delivers no-frills blues-funk with vim and vigor ("Idris"). Organist Dan Kostelnik and drummer Alan Korzin gel beautifully with Apicella throughout, conga drummer Mayra Casales makes her mark on "Idris," and the hot vs. cool combination of trumpeter Freddie Hendrix and Riley makes for an interesting pairing. While the horn hang never manifests as a competition, it's Riley's low-key brilliance that tends to win out.

Big Boss is a wonderful reminder of a time long gone. It's a record that speaks of good times, fun grooves, and high spirits.