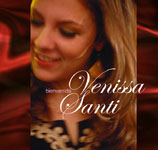 Bienvenida is the debut CD of a singer already attracting attention in the music world. In addition to her finely attuned voice, musical intuition, and grasp of the jazz idiom, Venissa Santi is a Cuban/American who has cultivated the music of her family's country of origin. By immersing herself in Cuban music, Santi has developed a style that is unique yet familiar, specifically ethnic yet reflecting an eclectic mix of styles and motifs. Bienvenida is a welcoming view into a special world, which Santi has created out of her varied experiences and musical capabilities.

Unlike the popular salsa music and hot Latin jazz, which are more common fare today, Bienvenida is an album that grows gradually rather than jumping out with a bold statement. Its understated quality is appropriate for a time when Cuban brothers and sisters are isolated in or from their homeland, and when people all over are wondering where their next job (or, for that matter, love affair) might be coming from. It's a time when life is difficult, and it calls for music that has inner resources. This is what Santi delivers.

The first track, "Tender Shepard and Little Girl Blue," is more than a medley of the two songs. Straight-ahead but with a conga rhythm, the unusual format links the two songs together with lyrics that refer one song to the other. "Tender Shepard, dream a dream or two of a little girl blue...tender Shepard and little Girl Blue, they know they were meant for one another... Count your little sheep and count your little fingers." Santi's Latin touch is charming.

"Convergencias" is a relaxed bolero, in which Santi and her musicians show themselves at home with both straight-ahead jazz and Latin stylings. "Lucerito De Mir Amor" begins oddly, with a brief recording of a man's voice evoking a private memory, before segueing into a soft, tender ballad in which Santi is accompanied only by the rhythm section in a mainstream manner. Santi then shows her fine grasp of the American Songbook with the Gershwin standard, "Embraceable You."

"Columbia pa Miguel Angel" offers a fast rumba, centered with a traditional Cuban monturo ensemble section, while "Wish You Well" is Santi's own tender, reflective ballad with a Sondheim-like feeling of irony. Santi sings regretfully to her former lover, "I guess you got your wish that you'd be a big tall bird in a small tree." The concluding track, "Cumpling Cumpling" is a Cuban rumba variation which incorporates a sensitive dialog between Santi and trumpeter Michael Rodriguez. Then the piece shifts energetically from a ballad with double-time backdrop to a rapid, danceable rumba.

With it's unique combination of flavors, its accessibility, and Santi's warm way of communicating, this pleasurable CD may well hit the charts in a big way, which is a nice thing to be able to say about music which has integrity and does not compromise the jazz idiom.

To learn more about the Spanish lyrics, intricate rhythms and other details of Bienvenida, read Santi's informative Reflections on the Cuban Roots of Bienvenida, AAJ's latest installment in its In the Artist's Own Words series.