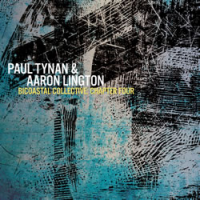 Trumpeter Paul Tynan and baritone saxophonist Aaron Lington first met more than fifteen years ago when they were grad students at the University of North Texas in Denton. After gigging separately for a few years, they formed the Bicoastal Collective about a decade ago and have been playing and recording together ever since. This could reasonably be called the Binational Collective, as four of the five musicians on Chaper Four are Canadian, with Lington the lone American. He lives in California, Tynan in Nova Scotia, some 3,800 miles to the east. On this "nostalgic" studio session (also the name of one of the seven tracks), the front-liners are reinforced, "collectively," by organist Tony Genge, guitarist Jake Hanlon and drummer Terry O'Mahoney.

The word nostalgic is used to denote the album's rear-view character, which, instead of "back to the future" is more akin to "forward to the past," focusing as it does on the sort of bop-induced themes popularized in the '50s and '60s by such labels as Blue Note, Prestige and others. With Genge on board, it hearkens back to the heyday of Jimmy Smith, Richard "Groove" Holmes, Jack McDuff, Don Patterson, Jimmy McGriff and their contemporaries. Even though all of the songs on Chapter Four were written by Lington (four) or Tynan, they are designed to rekindle dormant memories of the free-wheeling grooves laid down by those Hammond B3 masters of years gone by. They are, in Lington's words, however, "conceptually modern. The musicians, the harmonies, the rhythmic concept and the arrangements were all conceived without setting any boxes for ourselves."

That is clear from the outset, as Lington's "Un Petit Peu de Gras" sets a bluesy compass on which Genge shows his mettle with a sure-handed opening solo. "Nostalgic," Lington writes, is a bow to the Golden Age of American songwriting (Porter, Berlin and the like), while Tynan's even-tempered "L's Groove" was written not for Lington but for Tynan's daughter, Linnea. "Woodside," named for a community near Halifax, is a genial ballad with expressive solos by Lington, Tynan and Genge. "Lower Sackville Blues," a last-minute addition, is welcome for a number of reasons, one of which is that it expands the album's playing time to fifty-eight minutes. More to the point, it's a taut, fast-moving vehicle that sets the stage neatly for Tynan's closing numbers, "Pipe Down" and "Metaphor," the last based on Miles Davis' bop classic, "Four."

Individually or collectively, these are five first-class musicians, and their expertise and rapport are explicitly manifest on every page of Chapter Four. Let us hope the book has not been closed on the Collective, and that there are more chapters yet to come.