Beyond Words by John Prine 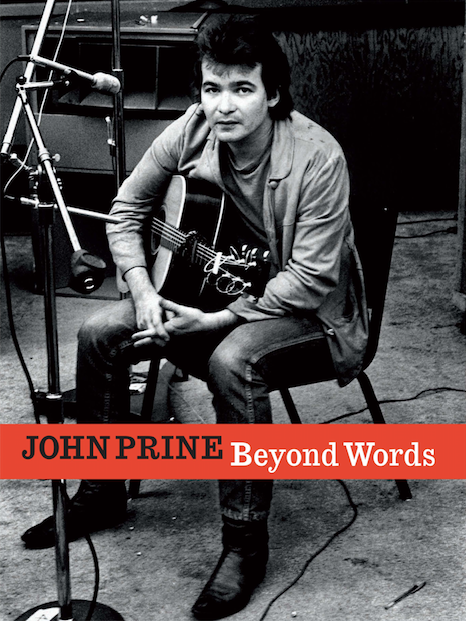 Anecdotally, Bob Dylan once surmised that John Prine was the last pure folk singer and counts Prine as one of his musical heroes. This statement is tantamount to the similarly anecdotal declaration by Frank Sinatra that Tony Bennett was his favorite singer. Both have the gravity of Jesus finally owning that John was his favorite apostle. All this palaver is necessary to be able place John Prine in the proper musical perspective. If Americana has to apply to a single artist capturing the essence of what being American, hell, what being human means, then it is Prine.

A two-time cancer survivor (1998 head & neck cancer; 2013 lung cancer) Prine could easily be one of the colorful characters in his songs. If Robbie Robertson's songs revealed America broadly like Norman Rockwell breaking bad on a whiskey binge, then Prine's vision is one more personal and localized. Being so, Prine's music can either caress or pinch that soft spot within all of us. Prine can hard. "Sam Stone" is not a pretty story. It is one, stark at the time—somehow sacred, now rendered cliché by a culture intent on seamy revelation. I believe that this is why Prine decided to share a different kind of "memoir." Beyond Words is a scrapbook revealing everything human about an artist that seems so much bigger. In doing this, Prine draws us all closer to that center which is him.

Prine includes lyrics and chords for his best known songs, facsimiles of these compositions, as well as, personal family photographs. Included in many photographs is Prine's good friend, Steve Goodman, who passed away in 1984 from leukemia. If his name does not strike a chord, Goodman was the composer of "The City of New Orleans," not Arlo Guthrie. He definitely allows his songs to do the talking. When considering his oeuvre, "Sam Stone," "Dear Abby," and "Donald and Lydia," and "Maureen, Maureen" loom large, but who I want to meet are the "Sleepy-eyed Boy" of "Aimless Love" and Prine's grandfather, who, "voted for Eisenhower 'cause Lincoln won the war." It is the kindness and real life in his songs that make him, this book, and all of his music so special.

"After all, these songs are not just words, and these photographs are not just pictures. They are my memories and more... beyond words."