By JOHN SHARPE
September 17, 2019
Sign in to view read count 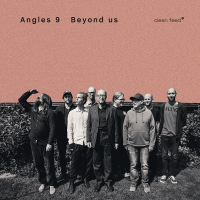 Swedish saxophonist Martin Kuchen's versatile Angles agglomeration has appeared in assorted sizes from a trio up to a nonet. But whatever the dimensions, it possesses the familiar virtues of driving riffs, explosive soloing, and elemental yet affecting melodies. Beyond Us, recorded live during Groningen's splendid Summer Jazz Cycling Tour is no different. It's the fourth release from Angles 9, and boasts the same crew which graced Disappeared Behind The Sun (Clean Feed, 2018).

Küchen wrote all five pieces, with varying assistance from his family, but the arrangements are the domain of the band, which ensures ample scope for personal expression amongst the group interplay. Beneath the seething grooves, all manner of complication and nuance takes place which can be easy to miss when focused on the obvious thrills. Küchen uses simple building blocks to achieve complex and moving ends. Solos emerge and subside, contrapuntal lines intersect, and polyphonic choruses erupt. His loosely-phrased voicings often give the illusion of a larger ensemble, recalling a more anarchic version of Charlie Haden's Liberation Music Orchestra.

The energy and exhilaration of the title track sums up the offer. Straight out of the gate comes a surging vamp with a slightly menacing feel. A wayward vibes outpouring from Mattias Ståhl gives way to pounding counter figures, as one section of the band vies against another. Magnus Broo's incisive trumpet eases the pressure, but a return to fever pitch and a cappella shouts brings the whole enterprise to a suitably adrenalin-filled conclusion. Cue enthusiastic applause.

Also notable is "Samar & The Egyptian Winter" which starts with the leader's strangulated alto, simultaneously muffled and blaring. Various combinations appear, featuring Mats Äleklint Quartet's nimble and muttering trombone, Goran Kajfes' melancholic cornet, and Küchen's anguished tenor with the wiry throbbing pizzicato of bassist Johan Berthling bookended by an ominous motif. Other individual moments of note include Alexander Zethson's angular and cascading piano on "U(n)happiez Marriages," Eirik Hegdal's brawny baritone amid the martial cadences of "Against The Permanent Revolution," and Andreas Werliin's drum boogaloo which launches the flag-waving closer "Mali." But ultimately it's the palpable excitement of the group as a whole which carries the day.

Beyond us; U(n)happiez marriages; Samar & the Egyptian winter; Against the permanent revolution; Mali.