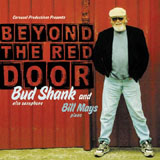 At its best, jazz is about spontaneity and surprise. It is also, as Bud Shank writes in his cogent liner notes to Beyond the Red Door, wherein his persuasive alto saxophone is seamlessly blended with Bill Mays's decorous piano, about "the expression of emotions... about feeling good, about self-respect, about self-assurance, about happiness and humor."

Shank and Mays bring all those qualities, plus a lifetime of experience, to bear in an engaging and varied program of old favorites and newer treasures that encompasses a broad musical and emotional spectrum. Shank, who at eighty-one wears comfortably the mantle of elder statesman, has always had a distinctive sound, readily identifiable, while Mays is arguably more generic but nonetheless proficient and tasteful. In any event, they comprise a single-minded team, partly because, in Shank's words, they were "especially happy to be playing together as a duo."

The happiness is palpable throughout, as Shank and Mays wend their way through a delightful melange of standards and original compositions that includes a pair of captivating melodies written by Shank and his wife, Linda ("Carousels," "Why Not Now?") and Mays' seductive waltz, "Quietly." The session opens on a suitably improvisational note with Zoot Sims / Gerry Mulligan's "Red Door," whose melody doesn't surface until the 1:30 mark. For a ballad medley, Mays suggested combining Russ Freeman's "The Wind," on which Shank had played alto flute on the original 1954 recording, with Jimmy Rowles' "The Peacocks."

The duo's choice of standards is impeccable, starting with Ray Noble's sensuous "The Touch of Your Lips" and including the Gershwin brothers / DuBose Heyward's plaintive "I Loves You Porgy," Cole Porter's cheerful "Everything I Love" and Rodgers and Hart's haunting "Where or When." As for the readings, they are invariably warm and perceptive. Playing time is a generous 71:45, while sound is remarkably clear and well-balanced. If there's a downside, it lies in the fact that tempos are slow to medium, and that one's degree of pleasure may rest largely on his or her fondness for alto sax / piano duos in general and Shank / Mays in particular. Here's one emphatic vote in the "thumbs up" column.

The Red Door; The Wind / The Peacocks; Why Not Now?; Quietly; The Touch of Your Lips; I Loves You Porgy; Carousels; Everything I Love; Where or When.