Valery Ponomarev: Beyond The Obvious

By KEN FRANCKLING
November 11, 2006
Sign in to view read count 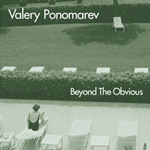 Beyond The Obvious is ex-Jazz Messenger Valery Ponomarev's seventh CD as a leader for Reservoir. His Means of Identification, recorded in 1985, was the label's debut release. Beyond The Obvious stands apart from the six prior (all quintet) sessions in terms of its instrumental format. It's out at a time when the Russian-born trumpeter is in the news for a troubling incident. In mid September, Ponomarev reportedly had his arm broken by Charles DeGaulle Airport security after refusing to relinquish his trumpet. He was asked to check his trumpet at the gate, despite the fact that it was already properly tagged as carry-on baggage.

Beyond the Obvious features a piano-less quartet, balancing two horns (Ponomarev's trumpet and Don Braden's tenor sax) with the bass and drums of Martin Zenker and Jerome Jennings, respectively. Jennings, who has toured and studied with Ponomarev, is a graduate student at New York's Juilliard School of Music. Suffice to say that he plays with empathy and talent belying his years.

This is a half-and-half mix of jazz standards and savory originals, one of which ("Love On Sale ) is an extended Ponomarev composition loosely based on Cole Porter's Tin Pan Alley chestnut "Love For Sale. The opening "You Dig, whose odd conversational patter title is actually the melody, was recorded by Ponomarev and the rhythm section while Braden sat in traffic on the way to the studio. It's a clever full-throttle blues.

Even on the standards—including "Close Your Eyes and "Chelsea Bridge —Ponomarev is the clever rearranger, enabling the quartet to mine interesting new facets, hence the project title. There's an intensity and beauty to their interpretation of Ornette's classic "The Blessing, from the late '50s. "Chelsea Bridge features three primary solo voices—trumpet, tenor and bass—and is a gem. Check out the subtleties and rhythmic variations that the ensemble adds to Lee Morgan's "Party Time, a classic blues from one of the leader's trumpet heroes.

Braden and Ponomarev's horn lines artfully complement each other both in tandem and as foils throughout this session. It's clear that the leader, so thoroughly grounded in bebop, is extending that exciting tradition.

You Dig, I Hear You, You Know What I Mean Etc.; Close Your Eyes; Party Time; The Blessing; From Cat To Nat; Sale On Love; Chelsea Bridge; Gina's Cooking.