By GLENN ASTARITA
February 12, 2015
Sign in to view read count 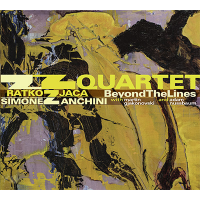 Three Europeans and celebrated American drummer Adam Nussbaum stir up some chutzpah via the guitar-accordion based format. In recent times the accordion's role in jazz-centric vernaculars has been expanding. And while this quartet doesn't invent a newfound genre, its spunky and articulate disposition, containing all original compositions engender a sophisticated outlook. With alternating tempos and several speedy unison choruses by guitarist Ratko Zjaca and accordionist Simone Zanchini, the band veers into changeable dimensions, largely executed within a sprightly modus operandi and tinted by subtle live electronics treatments and Euro-folk.

Each piece sports a micro storyline, whether it's Zjaca's windswept lines on "River Spirit," or when they morph French pop music motifs with ostinatos and linear bop phrasings during various tracks. The group's palpable diversity is often streaked by a get-up and go deportment with capacious theme developments, fluid solos, thorny time signatures, and tightly organized comps.

"Days of Old" is an attractive ballad, brimming with lament and supple support by the rhythm section, and highlights the quartet's wistful approach, often generated by Zancini's drifting, soul-drenched theme building jaunts. And they finalize the set with the affable and somewhat corny "The Easy Whistler," which is a tenderly shuffling piece featuring one of the performer's whistling and harmonization with guitar and accordion lines atop Nussbaum's gentle brushes across the snare drum. This track sounds like the opening theme for a TV sitcom, and tops off a buoyant production also including the ensemble's more serious-minded interactions. Even during the pumping and intricately exercised works, the quartet projects a calming presence, adding an iridescent spark to the entire program.

Title: Beyond the Lines | Year Released: 2015 | Record Label: In And Out Records