Renaud Garcia-Fons: Beyond The Double Bass

By DAN BILAWSKY
November 5, 2014
Sign in to view read count 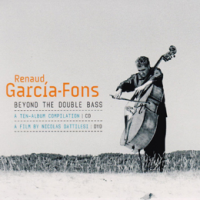 It's often tempting for musicians to project limitations onto an instrument, but in truth, the instrument rarely deserves blame; an instrument, after all, is simply an inanimate object, so it's up to the player to further, extend, and broaden its reach. Musicians looking to do so must master and move beyond standard technique and the stylistic status quo, but anybody who's ever picked up an instrument knows that that's no easy feat. It takes creativity, patience, skill, inspiration, and a lot of hard work to get there. Just ask Renaud Garcia-Fons.

To hear Renaud Garcia-Fons is to hear the double bass anew. He moves well past standard bass rhetoric, creating a whole new language via his own personally-forged and honed techniques. He can come off like a one-man orchestra, sing sweetly like a violinist or cellist, create his own percussive underpinnings, and assemble fully-formed constructs with nothing more than his five-string bass in his hand(s); he's not called "The Paganini of double bass" for nothing!

Beyond The Double Bass is a testament to Garcia-Fons' longstanding relationship with the ENJA imprint and a look at his recorded achievements presented on that label over a two-decade span. The album compiles fourteen tracks from ten different releases, covering Garcia-Fons' work in solo settings, large groups, and everything in between. His bass's love affair with the accordion is well-documented here, as he works with David Venitucci in some places and meets Jean Louis Matinier for conversation ("Al Camaron") and collaboration ("Bari") in others, and his musical relationship with flamenco guitarist Antonio "Kiko" Ruiz is highlighted on a number of tracks. And whether he's working alone, fronting a quartet, leading a septet, or working within a crowded ensemble, he always proves engaging, exuding charm at every turn. Solo performances never come off as anemic and large group affairs ("Wadi Rum") never sound cluttered. Garcia-Fons is always aware of space, sonics, and balance.

While the "World Music" tag has come to mean too much or absolutely nothing over the years, it's actually applicable here. Garcia-Fons taps into rhythms from the Sahara ("Wadi Rum"), blends South American and Indian points of view ("Entremundo"), mixes flamenco and jazz ("Berimbass"), plants his bass into Sicilian soil ("Palermo Notturno"), and gazes elsewhere, searching the world for sounds to absorb, explore, and retool. And while the album itself drives all of those points home, the accompanying DVD—a beautifully produced documentary film from Nicolas Dattilesi—reinforces them. Garcia-Fons' awe-inspiring work isn't just beyond the norm for the double bass; it's almost beyond belief.