By C. MICHAEL BAILEY
May 4, 2012
Sign in to view read count
Track review of "Temptation" 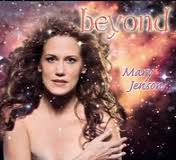 Vocalist Mary Jenson follows her well-received 2009 recording Close Your Eyes (Self Produced) with an homage to the dream state with Beyond. Coming from a large military family that never stayed put for long, Jenson developed a gypsy's soul and a musical taste for the world rhythmic and cosmopolitan. Her song selection is novel, including compositions by The Beatles ("Come Together"), Stevie Wonder ("Too High") and Joni Mitchell ("Moon at the Window").

But it is the opener, Tom Waits' "Temptation," that really captures Jenson's world music-jazz view. Pianist Frank Martin sets up swirling smoke over the poly-rhythms of drummer Will Kennedy and uber-percussionist Alex Acuña. The arrangement is light, with moments of inventive melodic grounding firmly in in the warm climes of the Caribbean rim. Jenson's pliable voice shares these characteristics of the arrangement. She transforms this Waits ballad (sung to great humid effect by Cote de Pablo in the opening episode of NCIS, Season 6). Jenson takes away some of the humidity and adds complex undulations, giving the piece a more urgent and visceral punch.