The Conduit Trio: Beyond Liquid Glass 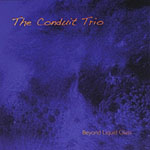 New Mexico is recognized as an artists' haven, but not an area that features jazz-rock power trios. Nonetheless, there are always exceptions to the perceived rule. Marked by strong material, consisting of memorable hooks, guitarist Robert Branch's sizzling riffs and blitzing crunch chords steer the band through a string of tension and release stylizations.

The trio also strikes a chord that might parlay notions of classic prog-guitar heroes, Joe Satriani, Greg Howe and Allan Holdsworth. The rhythm section seldom overstates its cause, but generates enough heat for Branch's cleanly articulated lines and sustain-driven attack. They tone it down in spots through quaintly organized motifs and ethereal, loops driven passages.

The musicians sport a laid-back country-jazz gait on "Melancholia," where Branch ups the ante with a climactic and blistering solo. However, the trio does a 360 on the rapidly swinging "Not For Not," where Branch switches to acoustic piano. Essentially, this piece elicits notions of Chick Corea acoustic piano based modern jazz, largely due to Branch's fluent chord clusters and the unit's knotty time signatures.

It's not about reinventing the wheel or integrating nouveau concepts. Other than the appealing thematic movements, dynamics are employed as enhancements to primary themes and to Branch's solo spots. Subtle surprises are in abundance throughout.

About The Conduit Trio