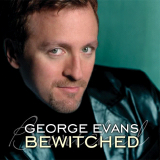 Singer George Evans has made a strong impression—first in Canada and then in the US—through his CDs and his live performances. Evans, who was born in the US, relocated to Montreal from New York in 1991. The pasture was greener in Canada and Evans made a mark in radio before he hit the live circuit. His growing reputation as a fine interpreter of songs was cemented with the release of his first album, Moodswing (M-Swing, 1997).

Evans sits in a comfortable niche between jazz and cabaret. His vocal technique is carved to bring out the best of both, and he makes sure his CDs have a generous helping of the styles. Bewitched is no exception.

The CD grew from three sessions. The main, comprising six of the tracks, was commissioned by the Canadian Broadcasting Corporation (CBC) for their radio program Jazz Beat, in 2004. Two of the songs come from 2002. They were to appear on a CD which was aborted following the death of drummer Jerry Fuller. The remaining tunes were recorded while touring Canada.

Evans opens appropriately with "You're Gonna hear From Me, swinging in briskly. His inflections and the way he shapes the words weave a spell that is extended by the band, particularly Michael Stuart. He brings an undeniable character to his playing, flowing freely as he does here, or hewing close to Evans as he scats on "Don't Be That Way.

Another bright spark is lit on the lilting "You Leave Me Breathless. Evans dips into the marrow of the lyrics, swinging deliciously while Reg Schwager adds the depth. He is a loquacious guitarist who constantly weaves fascinating tapestries, on this track as on many others. Evans closes with a warm ballad, "Tonight May Have to Last me All My Life. He is at the top of his calling, his singing deeply impassioned, his voice wistful and awash with hurt.

Evans and his outstanding band work in close harmony to bring songs from that Great American Songbook to life. And to leave the listener bewitched.