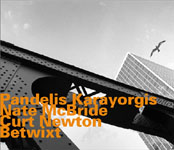 Tutored early on by Paul Bley, and with Thelonious Monk and Lennie Tristano his most pronounced formative influences, Pandelis Karayorgis isn't the most likely pianist to become a late-adopter of the Fender Rhodes. But after some twenty years recording with an acoustic instrument, on Betwixt Karayorgis exclusively plays the electric Fender Rhodes.

Or perhaps that should be "rebirths" the Rhodes. Karayorgis comprehensively wrenches the instrument from its 1970s fusion legacy and offers it up to post-modern jazz and free improv—augmenting its palette with a Mutron (a synthesizer-like sound filter once endorsed by Stevie Wonder), a distortion pedal, and a ring modulator (a Karlheinz Stockhausen favorite which twists sound signals into new and often dissonant frequencies).

It's a delicious conceit. The combination of analog-era electric keyboard—the Rhodes produces sound mechanically rather than digitally—and vintage sound-shifter effects positions Betwixt outside normal chronology. The music sounds simultaneously futuristic and from another, earlier space—rather like boogie woogie pianist Meade Lux Lewis' use of a celeste on a 1941 session with clarinetist Edmond Hall, available on the Charlie Christian box set The Original Guitar Genius (Proper Records, 2005), or Fats Waller's use of a church organ.

It also sounds carnivalesque, primitive, unhinged and subject to random diversions—there are times when you wonder whether Karayorgis is leading his instrument or himself being led by its deus ex machina sonics—qualities which lend themselves brilliantly to four lesser-known Monk covers. "Green Chimneys" and "Brake's Sake" are given brisk, hard swinging workouts, Karayorgis sounding at times like a mutated soul-jazz organist, at others like guitarist Jimi Hendrix. "Light Blue," like Duke Ellington's gorgeous "Heaven," is more delicate. "Humph" is more rhythmically free.

Appropriately, Karayorgis also tips his hat to seminal time-traveler Sun Ra, whose "Saturn" is given a nine-minute exposition which cleverly reverses the blueprint revealed on Jazz In Silhouette (Evidence, 1958). Ra's tricky intro is re-centered on a solid, beat-centric bass ostinato, and his delightfully retro, swing-era main theme acknowledged, taken apart and finally reassembled.

Betwixt could easily have been a freak show—and there's no denying its novelty appeal—but it's much more than that. Karayorgis' new sonic and textural peregrinations are as substantial as his acoustic piano playing, and he's robustly supported by bassist Nate McBride and drummer Curt Newton. Already compelling on this first flush, it's a direction worthy of further exploration.

And now...who's going to pick up the Wurlitzer mantle left by the late Alice Coltrane?