Paula Matthusen: Between Systems and Grounds

By PATRICK BURNETTE
November 5, 2018
Sign in to view read count 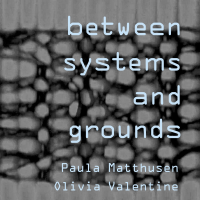 A quick glance at the personnel and tracks for this album will warn you: jazz, this ain't. Indeed, music, arguably, this ain't. Rather, Between Systems and Grounds is a set of elaborately generated, minimalist soundscapes that were part, apparently, of art installations at various institutions. The press materials focus on the process more than the product: "each iteration and performance, integrat[es] field recordings, radio signals, feedback, and a system of cues that all contribute to the slowly-growing textile. The textile lives and grows in handmade foamcore furniture that acts as a work surface, sculpture, and music box that slowly plays back accumulated recordings triggered by the textile. As the project continues, all of the systems will continue to grow and change in response."

Wrapped your head around that, yet? What possible use could a recording of these procedures have for the average listener? Could the result be anything more than a curiosity piece? It doesn't ease one's skepticism to discover that the album will only be available as a download and—hipster alert—as a cassette (vinyl apparently being too mainstream—or, to be fair, too expensive—to produce). One might dream of meeting some twenty-something from Brooklyn cranking Between Systems and Grounds on his (or her) dashboard tape-deck—or is that a nightmare?

And yet, despite all these layers of artiness, the recording itself is surprisingly accessible, a kind of ambient soundtrack for an atmospheric horror movie. No tunes to hum here, just odd, recessed, little sonic events layered on top of drones that sustain tension without cranking the intensity past simmer. Great stuff to read—or write—a scary story to, or just the thing to play in the background of the next family Thanksgiving gathering if you'd like to make it a dollop more uncanny than usual. Indeed, it's not bad stuff to stick on the background when your brain wants a little tickle of dread now and then while it focuses the rest of its attention elsewhere. It's not terribly different from Brian Eno's excursions in the genre, just with events in the background—crickets, thunderstorms, frogs, birds—that give the proceedings more narrative impetus.

No way around it—this is music for use, not something most listeners will find satisfying played in the foreground. But music for use has its place, and who could resist adding where one of the two musicians plays "textiles"?