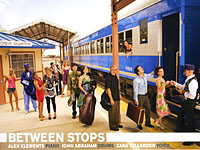 Hailing from different backgrounds and cultures—all on separate musical journeys that have brought them together for a distinct purpose—begs the question: what do American drummer John Abraham, Canadian pianist Alex Clements and Swedish singer Zara Tellander have in common? The answer: a musical train ride that brings them together on Between Stops, offering a blend of light contemporary jazz and Brazilian flavored rhythms bursting with energy.

This is not a traditional trio recording; the three musicians, essentially co- leaders, are joined by bassist Derek Jones, percussionist Kurt Rasmussen and reedist David Stambaugh, comprising the meat of the group. There are no traditional standards found on this recording, with each artist contributing four vibrant originals that showcase their talents, both as composers and musicians. The music is evenly divided between contemporary jazz vocals and spicy Brazilian- tinged charts that provide a spark for the swing in the music.

With no instrumentals at all, singer Tellander plays a pronounced role, her contralto voice delivering lyrics with a nice measure of grace and style. Abraham is a versatile drummer who plays vibes on two of his own compositions, "Falling" and "Brazilian Lover," with Kurt Rasmussen subbing on percussion. Clements, who is outstanding throughout the disc, plays accordion on Abraham's sensuous "Falling," and delivers a very strong introduction on the modern jazz of Tellander's "Empty."

The driving force behind this album has to be the steamy Brazilian flavored songs that move the music in a swinging direction, beginning with Clements' opening "We Are One Through The Music" and continuing on with the gyrating "Never Crossed My Mind." More such rhythms are found on "Bittersweet," "Falling," the samba beat pulse of "Into The Sky" and the sultry finale, "Brazilian Lover."

Assembling a fine cast of musicians and providing creative moving charts, Abraham, Clements and Tellander deliver a smooth and swinging musical train ride in Between Stops to their final jazzy destination, though a few more stops like this may be eagerly welcomed by jazz audiences who sample this disc.

We Are One Through The Music; Never Crossed My Mind; Silence Is Speaking; Bittersweet; Falling; Waiting For You; One Day; Empty; Between Eternity; Into The Sky; Snow; Brazilian Lover.