By JOHN SHARPE
November 3, 2018
Sign in to view read count 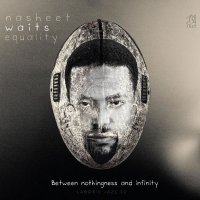 Here's one that almost got away. There's so much good new music issued now that it can be hard to keep track even within a single genre. Of course that's part of the reason websites like All About Jazz exist: they help with the filtering. Drummer Nasheet Waits' stellar Equality Quartet gave one of the standout sets at the 2018 Vision Festival, featuring the line up and material from this album which came out unheralded in 2016 on the French Laborie imprint. The CD proves every bit as good as the live performance.

Waits, who fuels the bands of Jason Moran and Christian McBride among others, leads a slightly more left-field but similarly top drawer outfit himself, comprising saxophonist Darius Jones, pianist Aruán Ortiz and bassist Mark Helias. Having assembled such a roster of talent, Waits gives them plenty to do on a program which intersperses three rarely heard covers among five varied and involved originals which recall a modern day version of free-bop.

They often traverse multiple territories, especially on the longer cuts. Even in the opening "Korean Bounce," Jones' bittersweet alto saxophone ranges from pithy abstractions via dreamy musings to choked emotion, a course echoed by Ortiz on Helias' jerkily unfurling "Story Line," veering from muscular syncopation to scuttling runs. There's also room for an inventive pizzicato feature for the author before the return to the initial theme. Jones drops out on the drummer's dirge-like title track (named after a quote from social theorist and writer Franz Fanon, not a misremembering of the Mahavishnu Orchestra classic) opens out for more of Ortiz' angular conversational bluesiness.

It's the covers that reveal the band's DNA, from Andrew Hill's sprightly "Snake Hip Waltz" with Jones' gradually curdling alto, to the two versions of Sam Rivers' "Unity" via an initially pointillist, later restless, take on Charlie Parker's "Koko." Of the two renditions of "Unity," the first is a brief hard driving group vamp embellished by Waits, but it's the extended closing reprise which takes the honors, launching an increasingly energetic call and response between Jones and Ortiz which blooms into all out skronk, before Waits' only solo of the set and the final crisp stop.

It's a dynamite package that deserves wider recognition.