Better Git It In Your Soul: An Interpretive Biography of Charles Mingus 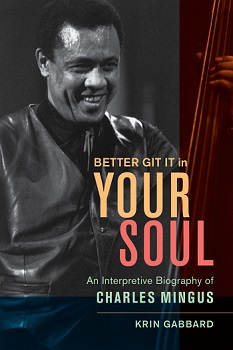 Compared to other historically important jazz figures, few have been the books dedicated to Charles Mingus, which is strange given his enduring influence on modern jazz practitioners. Perhaps Mingus was simply too complex a figure, both as a character and as a prolific composer of wildly inventive music to invite easy literary description. In terms of jazz history, Mingus was something of square peg in a round hole. "He could have become the Charlie Parker of the bass, the Duke Ellington of the small orchestra, or the eminence grise of the avant-garde. Instead, he was all of these and none of these," opines author Krin Gabbard in an often illuminating read that celebrates Mingus, the iconoclastic artist of voracious appetites.

Gabbard draws heavily from the two pre-eminent books on Mingus, Brian Priestley's Mingus: A Critical Biography (Quartet, 1982) and Gene Santoro's Myself When I Am Real: The Life and Music of Charles Mingus (Oxford University Press, 2000) and much of the author's biographical narrative will be quite familiar to Mingus fans: Mingus' upbringing in the Watts neighbourhood and his racial identity issues; his early mentors, influences and collaborations; his tireless creativity; a conflictive personality that led to violent outbursts; his mental health issues, etc.

Gabbard, however, through his examination of the forces both internal and external that shaped Mingus and his art throughout his colorful life, paints a subtle psychological profile that attempts to get under the skin and into the mind-set of his subject, and this he does with some degree of success. There may be few genuine revelations but Gabbard's main thrust is to portray Mingus as a unique figure in jazz history and as a more complex and multi-faceted talent than is perhaps generally appreciated.

In the book's introduction the author acknowledges his sources, including an early, unedited draft of Mingus' autobiography, Beneath the Underdog and a collection of Mingus' reel to reel tapes donated to the Library of Congress by Mingus' widow, Sue Mingus. Gabbard also studied Mingus' correspondence (letters and memos) that document the exhausting process—for Mingus and editors alike—in transforming Mingus' voluminous draft autobiography into the eventual, relatively slim-line published version. In addition, Gabbard draws from recorded interviews with Mingus' two sisters, released on CD as The Mingus Sisters Speak in 2001. There's no doubting the author's rigorous detective work, but arguably little of genuine surprise arises from any of these sources.

Gabbard devotes significant space to Mingus' autobiography in a chapter that explores the bassist/composer's literary bent. During his lifetime Mingus wrote poems, letters, manifestos and liner notes and Gabbard's analysis of Mingus' lyrics and poems emphasize the "multiple modes in which Mingus expressed himself"; for Gabbard, Mingus was much more than just an extraordinary bassist and composer.

Whilst Gabbard's claim that Beneath the Underdog proves Mingus to be "a master of literary form" may seem exaggerated, it's certainly true, as the author Gabbard is careful to note, that Mingus' wildly entertaining, fantastical and provocative autobiography—Mingus had wished to title it Memoirs of a Half Yellow Schitt-Colored Nigger—was, and remains to this this day, exceptional in a genre dominated by ghost-written hagiography and linear personal histories of often little literary substance. The book generally received negative reviews from the critics, but Gabbard argues that the critical establishment was "not ready" for such a mould-breaking work.

Mingus' autobiography, like his music, posits Gabbard, was complex yet sophisticated, visceral yet soulful. The same year of Beneath the Underdog's publication, Mingus received a Guggenheim Fellowship and was voted into the Downbeat Hall of Fame and Gabbard argues that "Mingus deserved an award for his book every bit as much as deserved one for his music"

One chapter examines Mingus' flirtation with The Third Stream—the early fusion of jazz and classical music—and his place in jazz history. The author's contention that Mingus was a unique figure due to his historical collaborations carries some weight. Mingus played with New Orleans practitioners such as Kid Ory and Barney Bigard and had a two-month stint with Louis Armstrong in the early 1940s, quitting just before a tour of the South for fear he would be killed. Mingus played with Coleman Hawkins and Howard McGhee, arranged for Dinah Washington and played in the bands of Lionel Hampton, Ellington and Red Norvo. Mingus shared the stage with trail blazers like Parker, Bud Powell, Max Roach, Miles Davis, Dizzy Gillespie and Art Tatum.

According to Gabbard, Mingus delved into modal jazz prior to Davis and, through his Jazz Workshop, even pre-dated the free-jazz of the late 1950s as represented by Ornette Coleman, Albert Ayler and Cecil Taylor. Of Art Kane's iconic A Great Day in Harlem photo of 1958, which brought together fifty seven jazz musicians on a Harlem brownstone, Gabbard notes: "Mingus stands out because no-one can lay equal claim to roles in both the ancient and modern traditions of jazz, not to mention traditions that the photo could not foresee."

One chapter focus on three of Mingus' most important, and longstanding collaborators-Dannie Richmond, Eric Dolphy and Jimmy Knepper, shedding light on their importance to Mingus and his music. The final chapter looks at Mingus in the movies—his appearances in documentary, and films where his music has provided a soundtrack. This chapter is the least essential part of an otherwise generally absorbing read, and the author's likely intention, as elsewhere, seems to be to underline the different facets to Mingus as an artist beyond the bandstand and the recording studio.

And, like many before him, Gabbard takes a swipe at Ken Burns' ten-part documentary Jazz (PBS, 2001), for all but ignoring the music of the 1970s—when Mingus made some of his finest—and for crediting Wynton Marsalis, the documentary's artistic director/co-producer, as the saviour of the music of Armstrong, Ellington and Parker. Although Gabbard acknowledges Marsalis' musical talent and tireless efforts to promote jazz through the Lincoln Centre, the author affirms that: "It was Mingus, not Marsalis, who was busy preserving the spirits of Armstrong, Ellington and Parker—as well as Morton, Tatum and the best of the jazz avant-garde—throughout the 1970s."

In short, with Better Git It In Your Soul Gabbard calls for a re-evaluation of Mingus' talents, his multiple contributions to jazz and his place in the music's ever-evolving history. A worthwhile and eminently readable addition to the small but important body of books celebrating the remarkable life and talents of Charles Mingus.