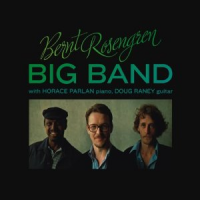 Swedish saxophonist Bernt Rosengren had already made his mark in various small group settings by the time he turned his attention to building a big band in the mid '70s. His tenor had captured the attention of many an ear in director Roman Polanski's Knife In The Water (Zespol, 1962), and his work with trumpeter Thad Jones, pianist George Russell, and trumpeter Don Cherry gave him a certain cachet within the European and American jazz scenes, but Rosengren's restless spirit kept him on the go, in musical terms. He'd already had his way with bop, post-bop, jazz-meets-Middle East hybrids and various experimental offshoots, so he turned his attention to the big band format when a thirst for something different overtook him again.

This particular date, originally released in 1980 and only seeing its first CD issue now, finds the Sonny Rollins-indebted tenor man fronting a solid and dependable big band with some help from two underrated American expatriates—pianist Horace Parlan and guitarist Doug Raney. All of the solos, save for some nice muted trumpet work from Lars Farnlof ("New Life"), are given up to these three men, and they deserve the space; Parlan's bluesy banter ("Hip Walk"), Raney's casual-yet-slick lines, and Rosengren's brawny tenor demand attention when they're at center stage. The leader also captures the imagination with his flute and alto in hand.

While pushing the envelope figured into some of Rosengren's small group work that preceded this album, his big band writing sticks to the straight and narrow. His belief that "big band jazz should be swinging and danceable" comes through loud and clear. Soaring brass, darting saxophone section solis, and lush harmonies rest atop a solid rhythm section that powers the music with walking bass lines and spang-a-lang cymbals aplenty. Bassist Torbjorn Hultcrantz and drummer Leif Wennerstrom occasionally work the straight eighth line ("Joe And Eye" and "Naima"), make double time/half time allusions, and play two against three ("Sad Waltz"), but they basically stick to a steady swinging philosophy throughout.

This album doesn't necessarily boast anything beyond the big band norm, but it showcases three oft-overlooked talents that shine throughout; that's more than enough to make this one memorable.