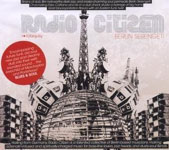 Berlin's Niko Schabel knows what German techno-music pioneers Kraftwerk began demonstrating all those years ago: if people program them right, even machines got soul.

A multi-instrumentalist and producer who leads a jazz quartet and plays with The Last Poets and other groups, Schabel weaves together the electronic jungle of Berlin Serengeti from samples, loops and electronic textures, plus his own alto saxophone, kalimba, percussion, Rhodes, clarinet and bass clarinet, flute, synthesizer and vocals.

It's a very modern electronic, and sometimes quite Teutonic, work. Yet it also sounds very influenced by jazz, specifically by two giants of modern saxophone, Pharoah Sanders and Coltrane.

So you can pluck from it two singles for dance clubs, "The Hop and "Championsound, skeletal post-millennial electro-funk, cold-chillin' to the point of frozen. Or you can dig the flute and saxophone as they lead thickly African bows to Sanders and Coltrane; more specifically, to the 1960-65 Coltrane quartet with pianist McCoy Tyner and drummer Elvin Jones.

Jones' wicked, brutal sound turbocharges "Night II and "Voices into flute/percussion free-for-alls. "Density drops an incendiary bomb spiritualized with Coltrane's ghost, its saxophone growing like a hyrdra's many heads from the throbbing bass, its flute rustling in between like a rattlesnake in the weeds. "The Prophets sounds like Sanders trying on colorful flowing robes of jungle and hip-hop.

"Producing this record was kind of like playing a game, Schabel notes on the CD sleeve. "Taking live recordings and turning them into samples, taking samples and arranging them as if they were live. I think this record seriously blurs the lines.... never mind how much studio-tricknology was applied, behind every track is a song.

"Liberty should be not just a word seems more than just a lyric to the third track ("Everything ). It's more like a great summation of the adventurous spirit of Berlin Serengeti.

Vocalist Ithamara Koorax also lends her angelic voice. On the title track, she rings in the dawn as supremely bright as a streaming ray of morning sunshine, and she transforms "An Evening Prayer into a reverent piece that seems precisely that. Her turns on "The Exile Song and "Urumutum/Swing Low Sweet Chariot are just as gorgeous.