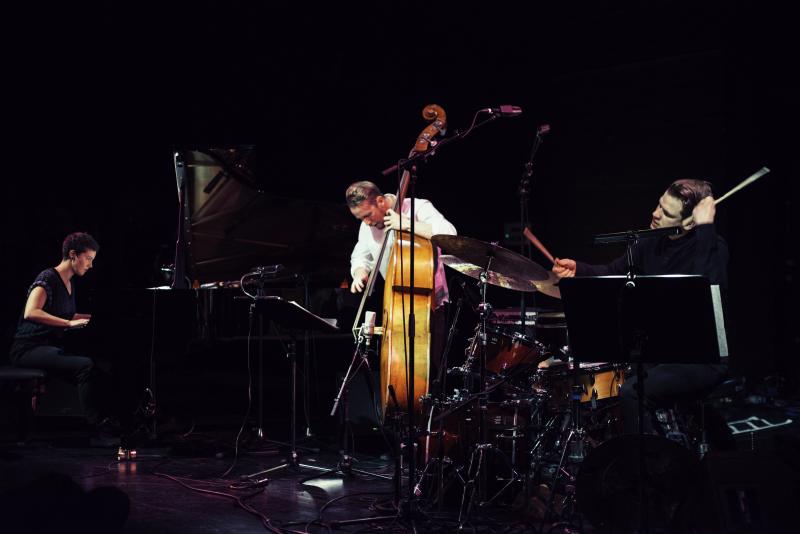 This year it was the last edition of Berlin Jazzfest under the aegis of British artistic director Richard Williams. With its "In All Languages" adage running through the six-day program as red thread, the festival still had promising stuff in store for the last two days, like the appearance of North-American trumpeter Amir ElSaffar with the Berlin Zinc & Copper Ensemble, Wilco guitarist Nels Cline's Lovers venture, artist-in-residence Tyshawn Sorey's conduction with Berlin musicians, the third part of the London-Berlin-Converstions (saxophonist Silke Eberhard, pianist Sarah Tandy, bassist Daniel Casimir and drummer Kay Lübke) at the A-Trane club, as well as this year's (Kaiser-Wilhelm-)Memorial Church concert with the Trondheim Voices and Kit Downes on the church's organ. Concerts that tended to operate in more familiar territory and concerts that went beyond were quite evenly distributed during these last two days.

Saturday commemorated the legendary Afro-American-French encounter around Louis Malle's historical movie Ascenseur pour l'échafaud from six decades ago. Saturday night's main program with UK quartet Empirical, Nels Cline Lovers and Dr. Lonnie Smith Trio was of the familiar type while the small stage, the club-program and the concert at the 'outside' location of the church at Hohenzollernplatz, fell into the beyond category.

The East-West encounter, constantly sparked and nourished, runs through all phases of jazz history. North-American trumpeter Amir ElSaffar is a recent voice contributing to this line from his exceptional American-Iraqi background. ElSaffar teamed up with an extended version of Berlin wind ensemble Zinc&Copper to perform his commissioned work, a blend of Oriental modal music (maqam) and traces of Western harmony using the remarkably rich acoustic possibilities of the church building at Hohenzollernplatz. It was the third time both parties collaborated. In 2015 and 2016 ElSaffar played as a guest of the ensemble and in this case an extended version of Zinc&Copper were collaborators of ElSaffar in the performance of his commission work.

While the performance led to some remarkable effects due to the deep reverb of the church, the performance fell short in its dynamics, the intricate mesh of micro tonality and rhythmical flow. Trombonist Hilary Jeffery in particular sparked the flame but those kindling moments were rare.

Something similar applied to the performance of Nels Cline's Lovers, the music of the guitarist's last year's Blue Note debut with nostalgic mood music associated with the miracles of love, sex, romance, loneliness, and passion. Recorded with a stellar line-up (a.o. Erik Friedlander, Steven Bernstein, Zeena Parkins, Kenny Wollesen, Yuka Honda) it is instrumental music "all meant to be as easy to ignore as it is to listen to it carefully," according to Cline.

Cline played with an ensemble of musicians from Germany, recruited among excellent young classical schooled, cross-genre operating musicians conducted by Michael Leonhart (as in the original recording). It surely had the potential to unfold, but the revelry did not blossom. With the great songs and the sophisticated arrangements it made an extra strained impression. Were the musicians less deeply rooted in this kind of music, less connate to gain the necessary level of smoothness and moodiness in a short rehearsal period?

Last day: where to from where

The last festival day opened with the traditional, fully sold-out concert at (Kaiser-Wilhelm-)Memorial Church at Kurfürstendamm, place of last year's terror attack (19 December) at the Christmas market around the church. Kit Downs opening with his organ phantasies built a richly layered, moving soundscape with regular dark, whispering undercurrents. He built unseizable tension that gradually ascended to a brightening point, giving space to the seven vocalists of the Trondheim Voices. Contrary to what could have been concluded from the program text, it was no collaborative thing like last year's concert.

The seven vocalists of Trondheim Voices differ from other vocal groups in various ways. They improvise collectively in real-time creation, don't work in fixed positions on stage, but move in different configurations (circles, rows) through the performance space and use a special electronic device that allows every vocalist to loop and shape their vocal sounds related to the other voices, and let their sound migrate through space as well as to control light. The evocated sounds are live regulated by the group's eighth member, sound design maestro Asle Karstad. In Berlin they presented their music dressed in a futuristic abstraction of traditional costume dresses, an outfit newly designed by Henrik Vibskov, the Danish designer/musician who also worked with Björk. The unity of technology, art and tradition, and the special Trondheim signature/trademark can be clearly recognized here.

To relate freely to six other free individual voices and proceed in an open as well coordinated collaboration is quite a challenge, every time. The Trondheim Voices work with and on the rich qualities of the human voice, gradually distil lines from it and give shape to emerging contours. In their captivating performance that lasted 25 minutes, they proceeded, step by step, to clear outcomes. They kept tension and pleasure of involved listening to finally arrive at a natural catharsis.

The first concert of the evening program was of anopen improvisational caliber similar to that of the Trondheim Voices. Artist in residence Tyshawn Sorey did a conduction in the spirit of the legendary inventor of that approach, Lawrence 'Butch' Morris, with a 20-piece-gathering of musicians from the Berlin scene(s). In a conduction a musical piece is created with a real-time performance as a result of indications/directives used by a conducting musician and musicians' responses with their instruments. The musicians contribute from within space and direction the conduction cues opens or demands.

The conducting musician wishes to create a full-fledged piece of music in/through the performance. (S)he can only achieve that through the creative flow of the responding musicians. Which doors/ways are opened and which stay closed or undiscovered? These are crucial elements in conductions. It was a good decision of Tyshawn Sorey to make this part of his residency program and bring it to the main stage.

The audience of the packed hall appreciated his conduction. It visibly enjoyed the dynamics, turns, textures and transitions, the open and wondrous process-side. Conduction put a lot of issues on the table in a highly attractive, stimulating way. A closer inspection and evaluation of its parts and aspects would be interesting, but goes beyond this review.

There could not have been a greater contrast between this and the two units that followed: a quintet and a 16-piece-orchestra, especially the contrast with the highly polished renditions of Monk pieces by John Beasley's MONK'estra extended by a few European musicians as Johannes Lauer, Joris Roelofs and Till Bronner a.o.. That unit was surely not the most evident and thrilling choice.

Last year the festival concluded with the bright, splendid apotheosis of Eve Risser's White Desert Orchestra throwing open all windows to new bustling stuff coming from a younger generation. This year the doors were shut discretely. It is in the character of Richard Williams to leave it with generosity and trust to his successor(s). From now on the aegis of Nadin Deventer will take its course.